Are you sitting comfortably?

Comfort is not normally a word associated with finance, but Terry Kendrew, Managing Director of forklift truck and warehouse equipment specialist Impact Handling, says it lies at the heart of every one of his company’s rental agreements with customers. 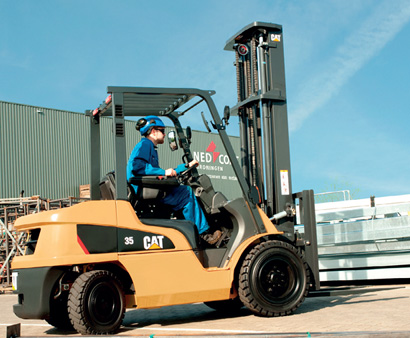 As boss of one of the UK’s largest independent materials handling companies, Kendrew is not only proud of the extensive range of Cat® Lift Truck machines and complementary marques his firm can offer – he says it’s the personal approach to business and flexible finance which help to drive high levels of repeat business. And it’s this flexibility, he says, which gives customers the comfort in knowing that if they need to change their machine midcontract, they won’t be penalised.

Kendrew explains: "Impact Handling is funded in such a way that we own every piece of kit we lease to a customer, which allows us to off-hire it whenever we want, rather than being at the call of a bank or finance house.

"This means that should a customer, at any point throughout the contract period, have a requirement to change the equipment it has on lease; they can do so without a hefty financial penalty.”

He cites an example of a customer which wanted to achieve greater warehouse capacity, meaning its fleet of 2.5 tonne counterbalance trucks with 4m masts needed replacing partway through a five year contract with machines capable of handling a 6m storage height.

"We conducted a site survey to establish the customer’s new requirements. Since the trucks coming off fleet were standard machines, we were able to add them to our short-term hire fleet and replace them with machines of the same age with 6m masts.

Had we not had a suitable product in our hire fleet, we would have offered to order brand new trucks and asked the customer to write a new five year contract with us. In that situation the first contract would have been terminated without penalty.”

In contrast, had the trucks been financed through a third-party, the finance house would most likely have exercised a penalty clause to ensure it received the full projected value for the length of the contract, in return for collecting the trucks early.

"Some customers won’t pay the penalty, so it’s not uncommon to visit sites and find trucks mothballed in the corner, awaiting collection at the end of the term. They are still paying the lease costs and insurance, as well as the charges for the new machines which have replaced them.”

The way Impact Handling finances its trucks, the penalty clause doesn’t exist. Impact Handling takes on the asset management role to ensure it is putting the right equipment in the right place. The only exception is if the customer takes a highly specialised machine which only fits their operation. In this instance, Impact Handling would assess the value of the machine on its book, versus the market value, and so long as the customer was replacing the truck with another machine, it would simply ask them to pay the difference.

"This figure wouldn’t be calculated based upon future hires and penalties,” says Kendrew, "it’s more of an asset calculation.

"Once a customer has had their fingers burnt once, they are far more aware of early return penalties when negotiating new deals. Many can’t believe we’re prepared to be so flexible.”

Impact Handling takes the view that companies in the current economic climate are constantly looking for the opportunity of change which will make their business more efficient and more profitable. The last thing they need is to have a fleet of trucks which don’t fit the job anymore.

Kendrew concludes: "Our finance deals give them the comfort in knowing that if they change their application, we will work with them and change their materials handling requirement accordingly.

We’re quite happy to take one fleet out and put another one in which is fit for purpose. We’re doing this all the time.”
MORE FROM THIS COMPANY