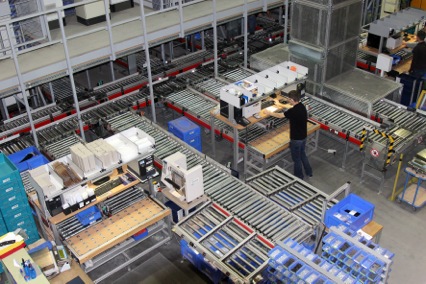 In 2007 Mafell implemented a TGW automated mini-load warehouse with two aisles. Since then there have been a lot of changes at Mafell. The production stock is composed differently, the revenue of finished products has increased and processes in production and assembly have been adapted.

Mafell project manager Andrea Heinzelmann explains: "In order to meet these new requirements and create a basis for further growth, we decided an extension of the automated mini-load warehouse was necessary.”

The existing automated mini-load warehouse was connected to the picking workstations via a conveyor loop. TGW implemented an additional aisle creating a further 8,000 tote storage positions on 20 levels along with an additional TGW Mustang mini-load automated storage & retrieval machine with a TGW Combi Telescope load handler, to support the company’s growth and prevent stock and material flow bottleneck situations in the warehouse. The TGW Commander controls, the tote scanner on the load handler and the interface to the existing controls, is a new development by TGW.

Goods to person
Mafell's picking system follows the "goods-to-person" principle. The first picking workstation is designated for the picking of distribution orders, the second picking workstation as a backup workstation or for storage ‘house-keeping’ procedures and the third picking station for internal orders and replenishment.

As part of this retrofit, TGW focused on modernising Mafell’s IT hardware and software. "The server was a special challenge regarding the hardware requirements of the project to integrate it into an existing server environment,” says Kurt Ammann, head of IT at Mafell. "This was solved together with TGW's retrofit team.”

The installation was successfully delivered and the live operation was not interrupted. Heinzelmann concludes: "The collaboration with the TGW team was great. Our requirements were understood and the plans were implemented on time by great project management and competent employees.”