Everyone in the industry is concerned about the increasingly proactive stance the DVSA is taking towards load restraint on curtain sided vehicles. Many complain that their requirements are unnecessarily costly and excessive. Loadhog, the transit innovator, disagrees. 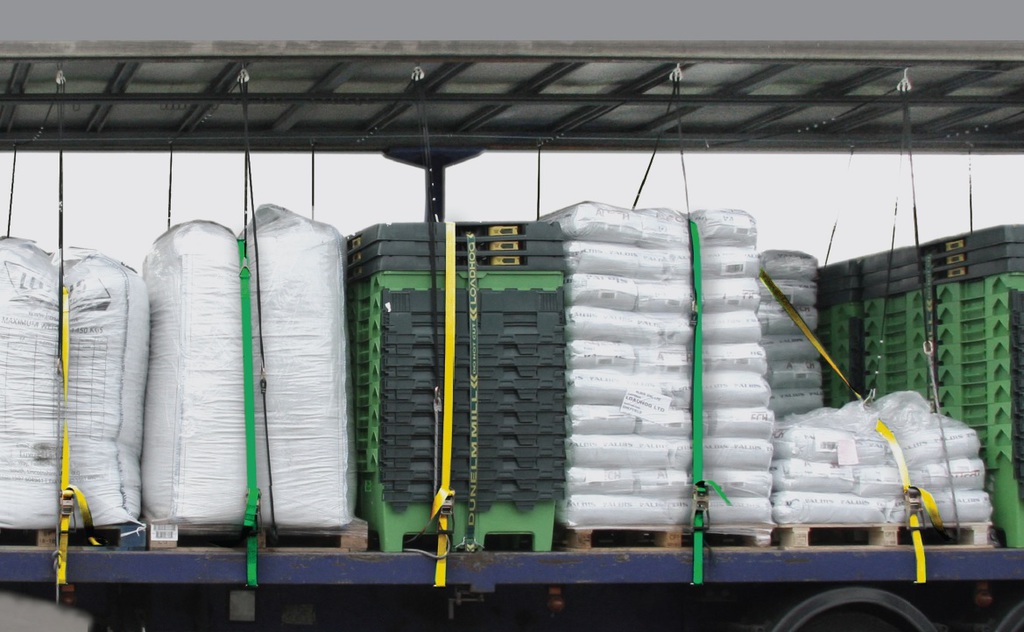 Ineffectively restrained loads are a problem within the logistics and haulage industry. The HSE reported that in 2009/10, three people were killed and more than 160 were seriously injured by objects falling from vehicles. There were an additional 740 injuries reported that kept people off work for more than three days. Statistics such as these, understandably put operators and regulatory bodies under significant pressure to improve standards.

The DVSA is now assessing the suitability of load restraints when they carry out roadside inspections. This process began in April 2013 and within six months of its implementation 1200 prohibitions (PG9s) were issued.

Historically, most operators have used one or two roof-to-rave strapping systems using either a centre pole or some form of rail and strap running along the length of the vehicle. There remains a great deal of confusion about whether or not an operator should or should not be using this, especially as many have been using similar systems for years.

The legislation itself has not changed a great deal since the Road Vehicles (Construction and Use) Regulations were introduced in 1986 which states:

The load carried by a motor vehicle or trailer shall at all times be so secured, if necessary by physical restraint other than its own weight, and be in such a position, that neither danger nor nuisance is likely to be caused to any person or property by reason of the load or any part thereof falling or being blown from the vehicle or by reason of any other movement of the load or any part thereof in relation to the vehicle.

With a significant number of deaths and injuries caused by ineffective load restraint it is clear that the status quo of years gone by has not been, and certainly is not, suitable and that a more practical approach by the relevant agencies is justified and required.

As part of a range of recommendations issued as far back as 2008, the HSE states that:

Loads should be secured so that they do not move relative to the trailer bed during transport. The curtains and the weather-protection structure of a curtain sided vehicle are generally not suitable for load securing.

The DfT also advises that:

The total load restraint system will generally consist of a combination of:

• Friction between the load and the vehicle platform.

With these legislation and guidelines in mind, it is clear that any system that uses the body of a curtain sided vehicle to secure the load is not suitable, which includes centre pole systems and rail and strap systems.

The Guardian Load Restraint System has been developed by Loadhog within the guidelines offered by both the HSE and DfT in mind. It is roof suspended and moves along the length of the vehicle in much the same way as the historical roof-to-rave strapping systems did.

It is operated from ground level and there is no need for the driver to climb on the load or blindly throw strapping over the load as they would have to with a standard ratchet strap.

When the Guardian is needed it is lowered into position by the driver and applies a positive connection to the load in a vertically down direction. When it is not needed, the driver pulls on a cord to retract the system back into the roof and out of the way. The patented ‘snake-tooth’ component locks the strap in position, preventing it from interfering with the loading or unloading process.

The Guardian is a roof suspended rave-to-rave strapping system. It applies a compressive load, thus preventing the load from moving and is therefore a load restraint.

With the Guardian system, and snake-tooth mechanism, Loadhog have developed a product which meets the requirements of the legislation, keeps loads secure and drivers safe, in addition to being cost-effective and simple to use. 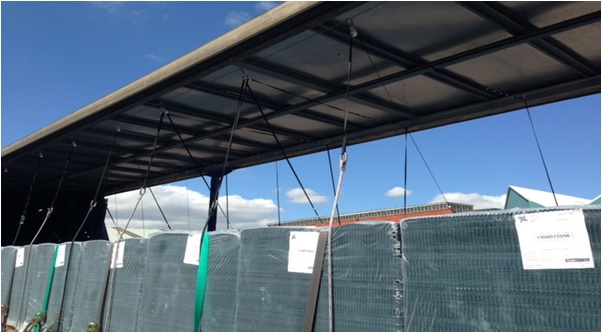