BYD unveiled its Iron-Phosphate (Fe) battery at CeMAT 2014 in a new series of forklift trucks. 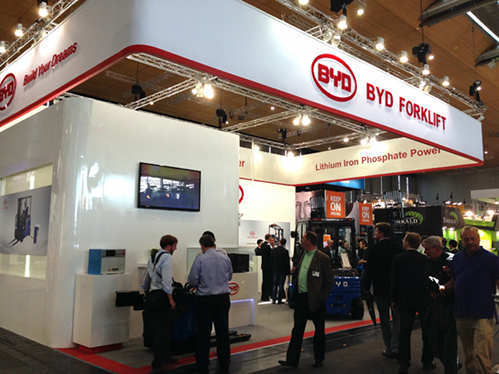 BYD is a Chinese manufacturer specialising in batteries as well as electric vehicles.

The company says the new technology is ‘a new concept completely redefining the performance users will come to expect from their electric MHE, removing many of these problems and substantially reducing the operating costs involved’.

BYD adds the truck battery will never need to be replaced over the life of the forklift.

It is said a BYD Iron-Phosphate battery retains over 75% of its original capacity after 4,000 charging cycles. That means that after 8 years of dual-shift operation five days a week, the remaining capacity in the battery will exceed 75%. The life span of the BYD battery is much longer than that of a typical (four to six year) lifespan of an ordinary lead-acid battery, says the company.

• Tuck battery will never need to be replaced over the life of the forklift.

• BYD Iron-Phosphate battery retains over 75% of its original capacity after 4,000 charging cycles.

• Typical charging time for a BYD Iron-Phosphate battery is one to two hours.

Typical charging time for a BYD Iron-Phosphate battery is one to two hours – less than a quarter of the time required by lead-acid alternatives.

A BYD battery can be significantly extended at any time with a quick ‘top-off’ session – 10 minutes’ charging can extend working time up to 45 minutes.

The company says it is also highly cost-effective, since the BYD Fe battery consumes around 40% less electricity during charging/discharging than a standard lead-acid one.

Javier Contijoch, Forklifts Director at BYD Europe, said: "Companies running lift trucks will be compelled to take a closer look at this technology.

"No fleet manager these days can afford to ignore the massive savings, in both purchase and operating costs, of the BYD ‘battery-for-life’ approach - or to pass up the opportunity of using such a clean, safe and sustainable source of power.”