Cardboard is the new scrap metal for thieves

A spike in the theft of paper and cardboard earmarked for recycling is being blamed on scrap thieves looking for "soft" targets. 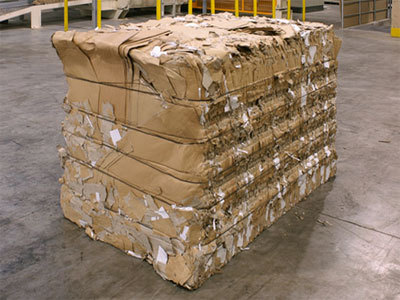 That's the view of a major British waste and recycling company that says increased security measures for scrap metal mean that criminals turning their eye on what previously been considered less lucrative refuse.

According to BusinessWaste.co.uk, the recovery in the price of recycled cardboard means that it's now economically viable for crooks to make off with bales from companies' loading areas with minimal risk.

"While the CCTV cameras and alarms are all trained on the scrap metal bin, thieves are finding easy money elsewhere," says Business Waste spokesman Mark Hall. "And most of the time it's ready for them in easy-to-handle bales."

BusinessWaste.co.uk says it's a crime that's not as "glamorous" as scrap metal theft that's seen road signs stolen, as well as the long-running curse of raids on leaded church roofs.

"Some police forces don't take this kind of behaviour seriously, as it appears on the face of it to be a victimless crime," says Hall. "Why investigate the theft of something from a rubbish bin?"

However, with companies able to sell baled cardboard waste for between £50-£70 per ton, it's a crime that can net the committed criminal hundreds of pounds daily if they know where to look and where to dispose of their ill-gotten gains.

"But thieves will also cruise down shopping streets in an unmarked van just before the commercial waste collection arrives, lifting all the cardboard left out by shop owners."

Some bin operators say they have encountered cardboard collection rounds where they've hardly picked up a scrap because organised gangs are so efficient. It's a lucrative crime with quick rewards, with little appetite from the authorities to investigate, the company says.

"But it's not a victimless crime," says Hall. "They're taking money out of the pockets of small businesses who are being paid per ton of their recyclable waste. That's straight-up theft.

"And they're also taking money out of the pockets of waste management companies who make money from collections. It's a crime that costs British jobs."

In fact, a recent report from the US says that cardboard thieves are costing recycling companies in New York up to ten million dollars every year.

"The rate of growth in this particular crime in the UK means that we'll be reaching those levels very soon," says Hall.

Calling on the police, local councils and the recycling industry to get together to address the problem, BusinessWaste.co.uk ‘s Mark Hall says: "It's high time this was taken seriously as a crime and stopped in its tracks."

"It's not rubbish that being stolen, it's livelihoods."