Pharmaceutical supplier Fagron responded to rapid growth by automating both an existing distribution centre but a new one. 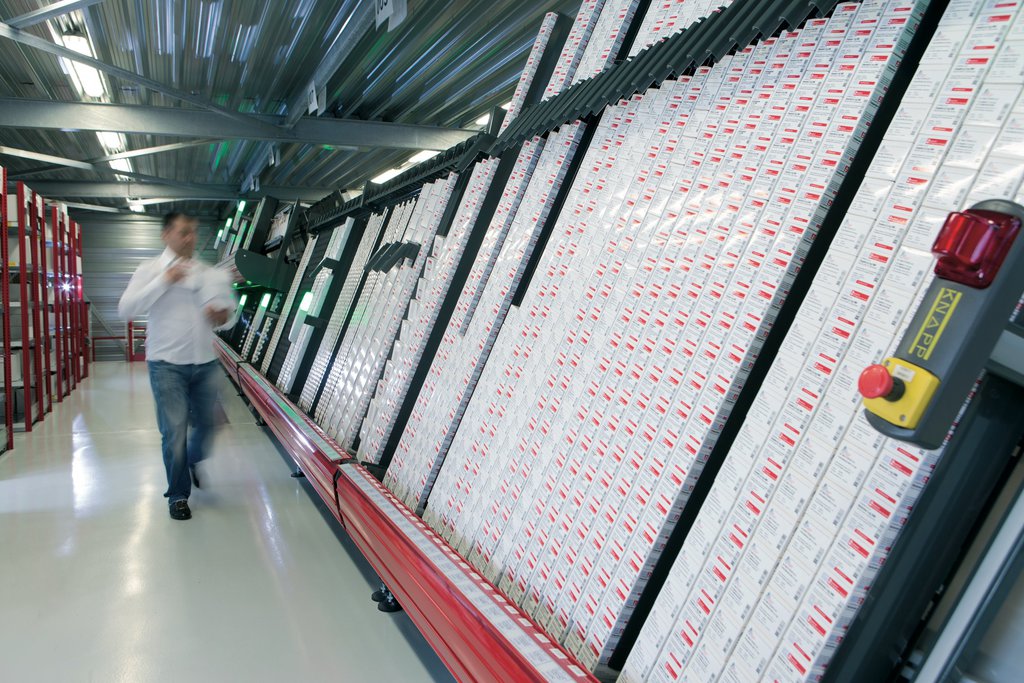 The Dutch company turned to KNAPP. In reinventing its logistics operation, Fagron wanted not only to enhance efficiency to handle increasing volumes but also to accommodate future growth. Despite its relative youth – being established in 1990 – Fagron is the global market leader in the niche but growing market of pharmaceutical compounding. This sector provides bespoke medications for patients who have difficulties with standard pharmaceuticals – those who are, for example, allergic to certain dyes or who have problems swallowing capsules. As well as finished medications, Fagron provides semi-finished products, raw materials, and compounding instruments and accessories. The company supplies some 200,000 customers in over 60 countries worldwide, employing 1600 people and generating a turnover of 335 million Euros in 2013.
With customer service and order accuracy paramount, the key challenge for Fagron is dealing with huge peaks of late orders, which the company guarantees to pick and ship by 7pm if received by 5pm. To meet its demanding logistics needs, Fagron turned to KNAPP and commissioned the warehouse automation provider to equip two distribution centres, modernising an existing one in Oud Beijerland and kitting out a brand-new one in Capelle aan den IJssel.
The Oud Beijerland DC deals solely with the picking and dispatch of direct customer orders. At just 350m2, the material handling solution for this site had to be highly compact and efficient. Here, KNAPP prescribed its A-frame SDA autopicker, which stores about 80% of the DC’s articles, picking the goods required for each order fully automatically by ejecting them onto a moving central belt, which then deposits the items into the relevant carton. The process is both very rapid and highly accurate. Articles such as tubes and pill bottles that are not usually suitable for picking by A-frame machines are also picked automatically using tube ejectors. The remaining articles – opiates and items requiring cold storage – are manually picked. Up to 1500 orders are processed daily, all within a few hours. The automation also included the order start area, where the cartons used in the warehouse are automatically erected, taped and labelled.
The new DC at Capelle aan den IJssel is a state-of-the-art building and fully air-conditioned. This DC – which supplies pharmacies, hospitals and pharmaceutical wholesalers – required optimal use of space, high storage density and efficient picking processes. The heart of the KNAPP solution here is its OSR Shuttle system, in which most of the product range is stored and which processes some 2,500 order lines a day. Again, order start is fully automatic and a scale transmits the weight of each carton to the control system so that the accuracy of the order can be checked after picking. 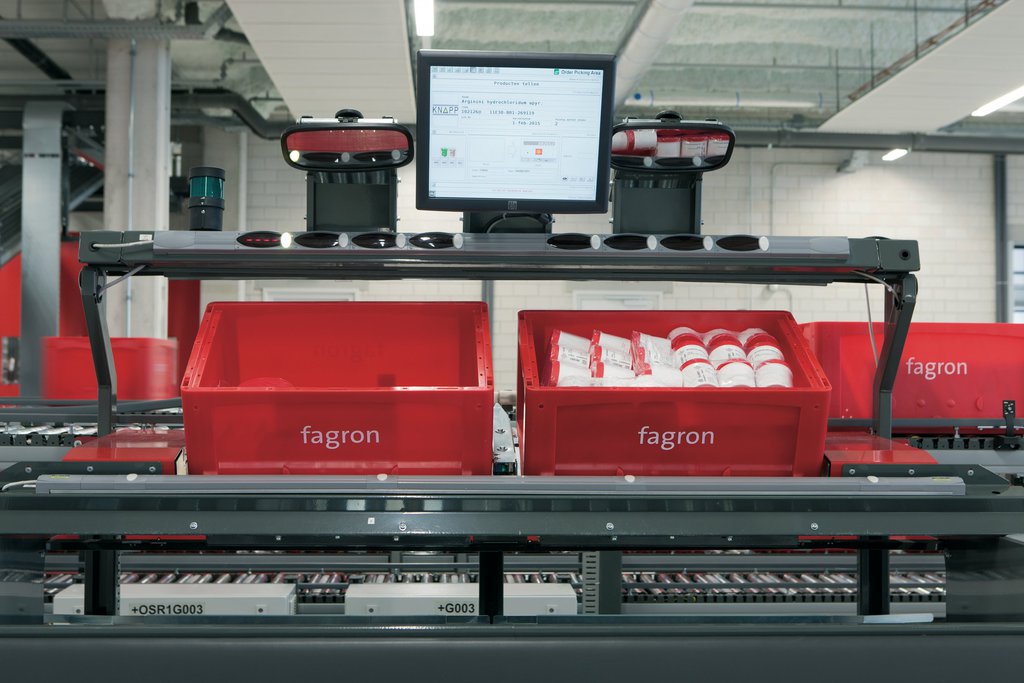 The OSR Shuttle system has some 3,200 storage locations for containers weighing up to 35kg, with the containers stored double deep. For optimum use of space, the containers can be divided into slots to store small items more efficiently. The OSR Shuttle is controlled by KNAPP’s KiSoft SRC software, with visualisation through its KiSoft i-Point. Articles required for orders are retrieved by the OSR Shuttle and conveyed to the Pick-it-Easy workstation. Ergonomically designed, this is equipped with pick-to-light displays that guide personnel through the picking process by indicating the pick location, pick quantity and remaining quantity, each of which must be confirmed by the picker. After picking, the pick-from containers are automatically transported back to the OSR Shuttle store.
 
Behind the Pick-it-Easy station are five pallet picking bays that are also equipped with pick-to-light technology. If an order requires products from these pallets, the corresponding pick-to-light display is automatically activated as soon as the container arrives at the Pick-it-Easy workstation, with the amount to pick displayed. In the manual picking area, paperless picking of refrigerated items is supported through RF technology, with articles in the separate opiates area being picked and double-checked using a pick list.
Each container is weighed after order picking is complete and if its actual weight deviates from its expected weight – according to the weights for all items recorded in the database – the container is diverted to a final checking station, which also carries out random sampling to ensure quality control. Check weighing has ensured that, despite a considerable increase in the number of orders, Fagron has fewer returns. Completed orders are then conveyed to the dispatch preparation station, where articles are repacked into suitable cartons, each of which is given a shipping label and a packing list – again produced fully automatically – with dunnage being added before it is sealed. In addition, about 30 bulk orders a day are processed at the Capelle aan den IJssel DC. For these, the host system sends a data record to a label printer and the shipping label is then applied to the carton before it is transported to the dispatch area.
The OSR Shuttle enables a much more efficient use of space. This allows the DC to house 20 days’ stock, compared to just two days’ stock in the old warehouse. The new system is also more productive, handling some 500 orders per hour, compared to 350 per hour with the previous solution – and with about a quarter of the employees. This means that peaks can be handled without the need for temporary staff, resulting in considerable savings. With the ability to add further aisles to the modular OSR Shuttle and more Pick-it-Easy workstations, the handling system at the Capelle aan den IJssel DC can easily be extended to accommodate growth in the future. 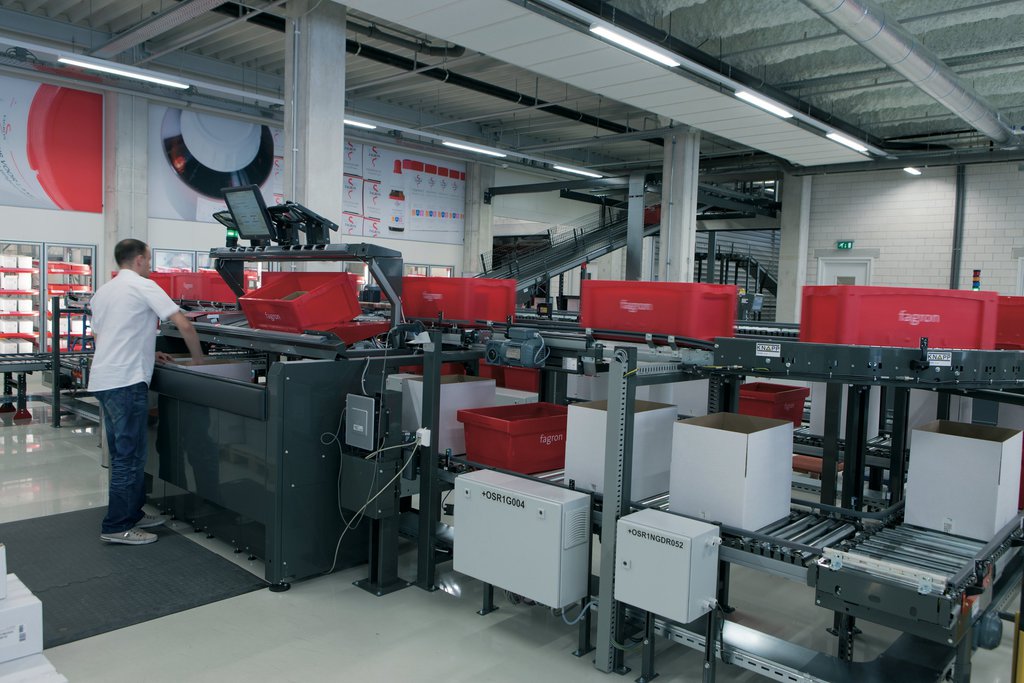