TGW has automated the National Newspaper Building in Boston Spa, West Yorkshire for the British Library. 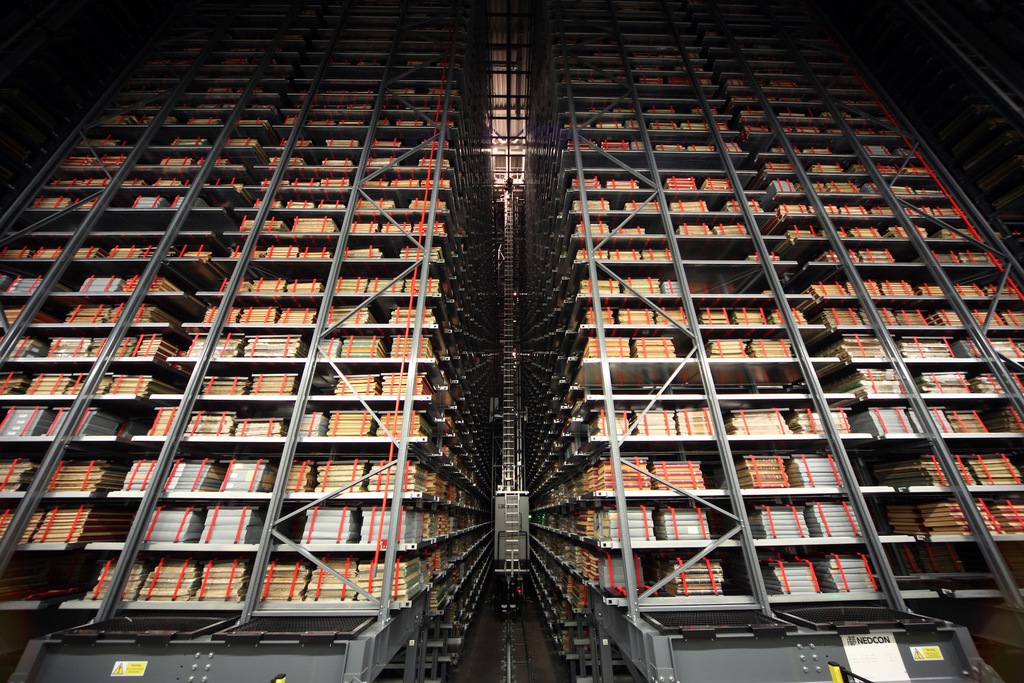 The NNB’s size and characteristics make it one of the most remarkable library buildings in the world, housing 300 years of local, regional and national newspapers, totalling an estimated 750 million pages.
TGW was awarded the contract from the British Library to supply and install an automated solution for the storage and retrieval of trays housing the newspapers and magazine media at the Boston Spa facility.
The building has full temperature and humidity control, which enables the British Library’s print newspaper collections to be kept in archival standard conditions for the first time ever. The store is dark and levels of oxygen in the airtight storage void reduced to 14% to eliminate fire risk. No British Library staff enter the void, instead they rely on the automated storage system to deliver items through airlocks to an adjacent retrieval and picking area.
In addition:
• The main storage void measures 24 metres high by 24 metres wide by 64 metres long.
• The facility will store 750 million pages of news print, which equates to 33 linear kilometres of newspapers.
• Temperature in the void will be a constant 14°C and 55% humidity to prolong the life of the fragile newspaper.
The system allows multiple unique stock keeping units (newsprint) to be stored in each tray location maximising the use of storage space within the trays. TGW’s WMS manages the items stored in each tray and the storage location of the tray within the automated environment.
TGW’s scope of supply includes:
• 3 x TGW Magnus machines with Spectra XL tray load handlers for double deep storage of the trays.
• Throughput of 42 trays in and 42 trays out per hour.
• 26,880 tray locations in 56 horizontal bays with 40 vertical levels. Each tray has a load carrying capacity of 300kg.
• TGW infeed/outfeed conveyor network consisting:
- 2 TGW transfer cars.
- 8 Workstations.
- PLC Control System.
- IWS Warehouse Management System.
The project was completed in 2014 and the National Newspaper Building was officially opened on 23 January 2015.
Following the completion of the British Library project, TGW’s Lifetime Services Team was awarded a rolling 12-month residential maintenance contract. The contract commenced from the middle of April 2014 and sees two new onsite residential colleagues supporting and maintaining the solution, accompanied by remote PLC & WCS support.
TGW Lifetime Services Director, Nathan Goudie said: "We are pleased at securing the support contract and look forward to working long term with the British Library."
MORE FROM THIS COMPANY