Performance limits, via pre-set controls, take counterbalance truck safety up a gear for the energy giant. 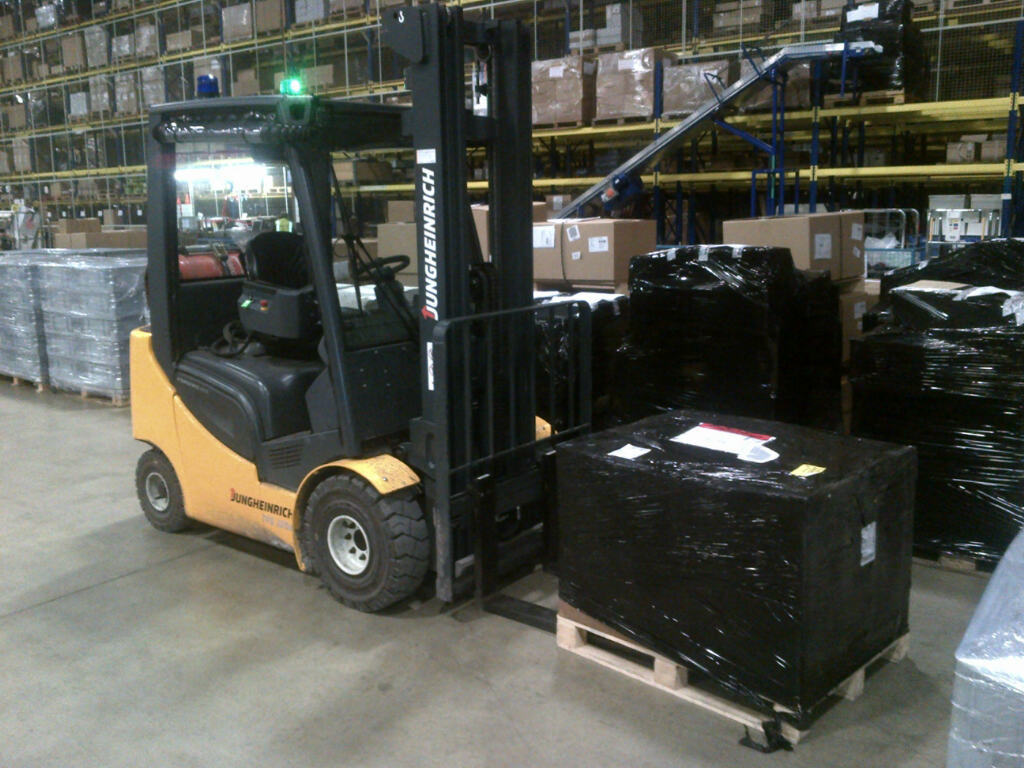 British Gas’ National Distribution Centre (NDC) in Leicester supplies over 13,500 service engineers across the UK with spare parts, consumables and workwear from some 40,000 stock lines. Every day over 35,000 spare parts are ordered and despatched for overnight delivery to engineers in the field, arriving with them by 7.45 am the following morning.

A critical aspect of ensuring the smooth flow of inventory through the NDC is the efficient and safe management of goods in the yard and receiving area. Over 200 pallet loads a day are delivered to the site, requiring a fleet of fast and efficient counterbalanced trucks to unload vehicles and deliver pallet loads to the receiving area within the warehouse in a safe fashion.

Up until May 2014, a fleet of four Jungheinrich trucks worked on yard duties. But British Gas wanted to upgrade safety in its unloading activities and calculated that it could improve operational efficiency, as well as safety, by halving the number of trucks in operation. However, it would require early termination of lease agreements on two of the trucks and the provision of two new Jungheinrich TFG320s trucks - which with the model’s hydrostatic drive, would offer smooth acceleration and variable speed control.

Jungheinrich was happy to support the early termination of the lease agreement and arrange an upgrade to the fleet under a new lease contract.

Working in two distinct environments - in the yard and within the building - places great demands on the truck drivers to conform to strict operational conditions regarding speed and acceleration. Health & Safety is of paramount importance to British Gas, so the company wanted a fail-safe system that would ensure that its counterbalanced trucks operated within set constraints appropriate to either inside or outside use.

To meet this requirement, Jungheinrich set the performance limits on the two new TFG320s to British Gas’ needs and fitted the trucks with a flashing beacon system to indicate when pre-set speed and acceleration controls were in operation. On entering the warehouse the driver simply flicks a switch, the pre-set controls come into operation and a green light flashes on top of the vehicle – indicating that it is in ‘safe’ operating mode. When used in the yard different parameters on speed and acceleration apply, shown by an amber flashing light.

"Health & Safety is a key concern for us. Having a system whereby we know, and can see, that the trucks are operating under strict pre-set controls is important to us. If we see that an amber beacon is flashing inside the warehouse we can intervene quickly,” says Bailey.

"Jungheinrich was happy to support the early termination of the lease agreement and arrange an upgrade to the fleet under a new lease contract."

Reducing the number of trucks working in the yard area from four to two has also had a beneficial impact on Health & Safety – fewer trucks working at any one time. Through better planning of truck usage and by retiring a truck kitted-out for weighing duties and instead, investing in a set of scales that can be used by any truck, British Gas has been able to improve operational performance in the yard using just two new Jungheinrich TFG320s.

Further major benefits from upgrading to the new hydrostatic Jungheinrich model include, lower operating costs and eco-savings through better fuel efficiency – a 30% improvement on the old model.

"Jungheinrich were particularly easy to deal with. We had trucks that weren’t due for renewal, but as soon as we started talking to them about wanting to improve on safety, they were very helpful, suggesting their new hydrostatic truck and offering a reasonable deal on ending our lease agreement early. So it has been pretty seamless. We have been able to get the new trucks much earlier and realise the benefits without having to wait to the end of the contract,” says Bailey.