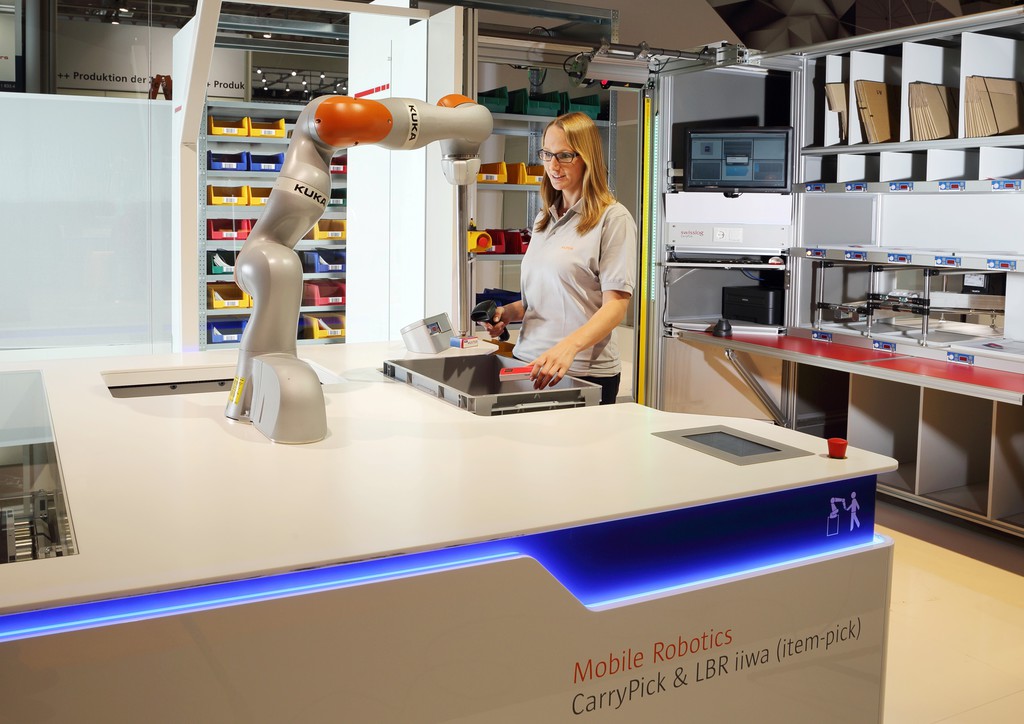 Over 220,000 visitors attended this year’s Hannover Messe, the largest industrial trade show in the world.

Under the ‘Industry 4.0’ technology concept, the Automated Item Pick workstation promises groundbreaking performance boosts for both picking operations and the supply of industrial assembly lines.

Even just a few years ago, the notion of humans and robots working closely side-by-side to achieve better results, was nothing but a futuristic idea. Today, the newly developed Automated Item Pick workstation, unveiled in Hannover, has made the vision a reality.

SEE THE VIDEO
To receive a movie link and watch this HRI in action, please email emma.daniels@swisslog.com.

One of the first tangible implementations of the ‘Industry 4.0’ concept, the Automated Item Pick workstation allowed visitors to the KUKA and Swisslog booth to experience ultra-fast error-free picking. Innovative image processing technologies are used to allow humans and machines to work together seamlessly and without cumbersome protective barriers.

The best of both worlds

For Swisslog, the Automated Item Pick workstation is an intelligent enhancement of its Click&Pick solutions portfolio, a modular warehouse logistics concept that offers flexible scalability as well as high throughput for storing and picking light goods. At Hannover Messe, KUKA’s innovative lightweight robot LBR iiwa, which realistically emulates human hand movements with its seven grip axis, celebrated its successful entrance into the world of warehouse logistics.

"Automated Item Pick is the first major milestone of our emerging cooperation with KUKA,” says James Sharples. Managing Director, Swisslog UK. "The feedback we’ve received from visitors at the Hannover Messe has been consistently positive. For us this is confirmation that Swisslog and KUKA have set out on the right path toward developing intelligent and innovative technologies for warehouse logistics.”