A bespoke carpet racking installation from SEC Storage has provided a floorcoverings contractor with a seamless transition to a new 109,000 sq ft warehouse in Kettering. 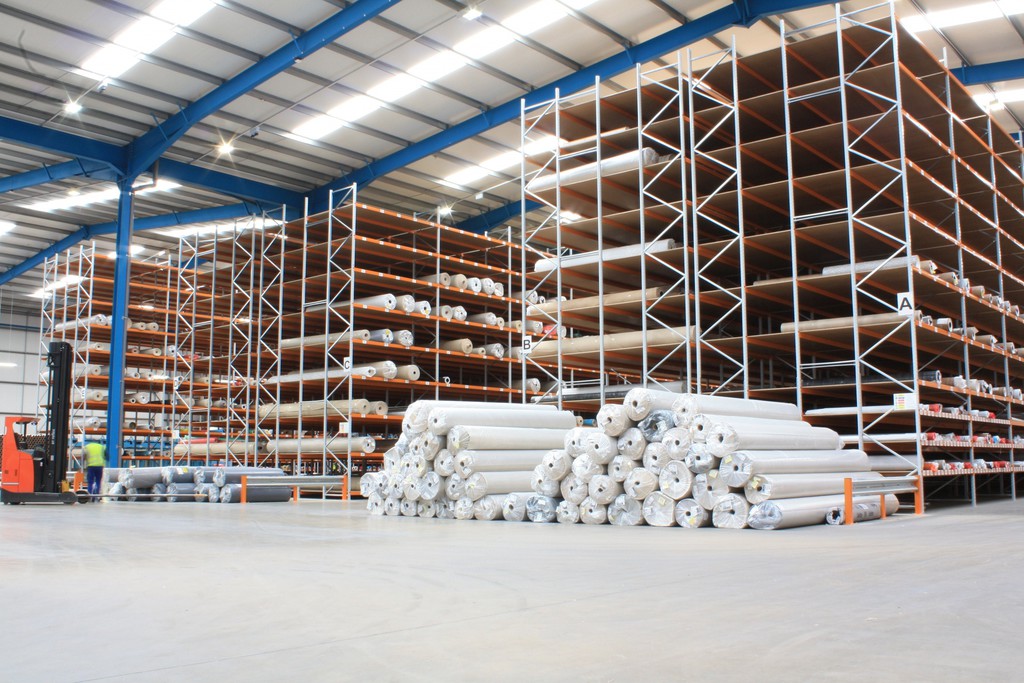 Relocating to a new, larger warehouse can often be a challenging task, managing both the fit out and making it operationally prepared.

"With carpet rolls measuring up to 5 metres long and handled using traditional forklifts we were fairly limited in the overall layout configuration of the racking” he says. "However, maximising space utilisation and the operation was still of the upmost importance to us as it would need to provide us with the growth plans for the next 10 years.”

The configuration of Designer Contracts much smaller existing warehouse was based on a 7 metre aisle. Looking to maximise capacity, SEC Storage first set about reducing the aisle width where possible, considering the use of reach truck forklifts with a bespoke carpet boom. However, upon detailed space planning it was discovered that reducing aisles provided no additional storage capacity when considering the double entry carpet racks would measure a total of 10.2 metres in depth. Increasing the aisle to 7.5 metres wide still enabled the optimum layout while providing greater space and therefore operational efficiency for the materials handling equipment.

To maximise the height of the building, the top beam level was set at over 10 metres. However this then presented issues of the cantilever effect of a 5 metre roll of carpet weighing up to 660kg on the materials handling equipment. SEC Storage, through detailed analysis, found that a 3700mm clear entry beam would offer optimum capacity and space utilisation for the installation. With four main SKU sizes, this clear entry would enable Designer Contracts to store any SKU, on any beam. This meant the lighter loads could be stored on the upper most beams providing operational safety for the materials handling equipment. The heaviest rolls, such as vinyl, would be stored on the lowest levels.

The design of the storage system also had to take into consideration a number of pedestrian fire exits that needed to be accessed on the perimeter of the warehouse. Instead of reducing the entire bay width to allow access, SEC Storage raised the first beam level to over 2.5 metres enabling pedestrian access and then designed a "stub frame” which would still enable the storage of carpet and vinyl beside the pedestrian walkway.

The installation is therefore able to store over 7,000 rolls of product, in addition to traditional pallet racking for palletised goods such as laminate flooring and installation materials. 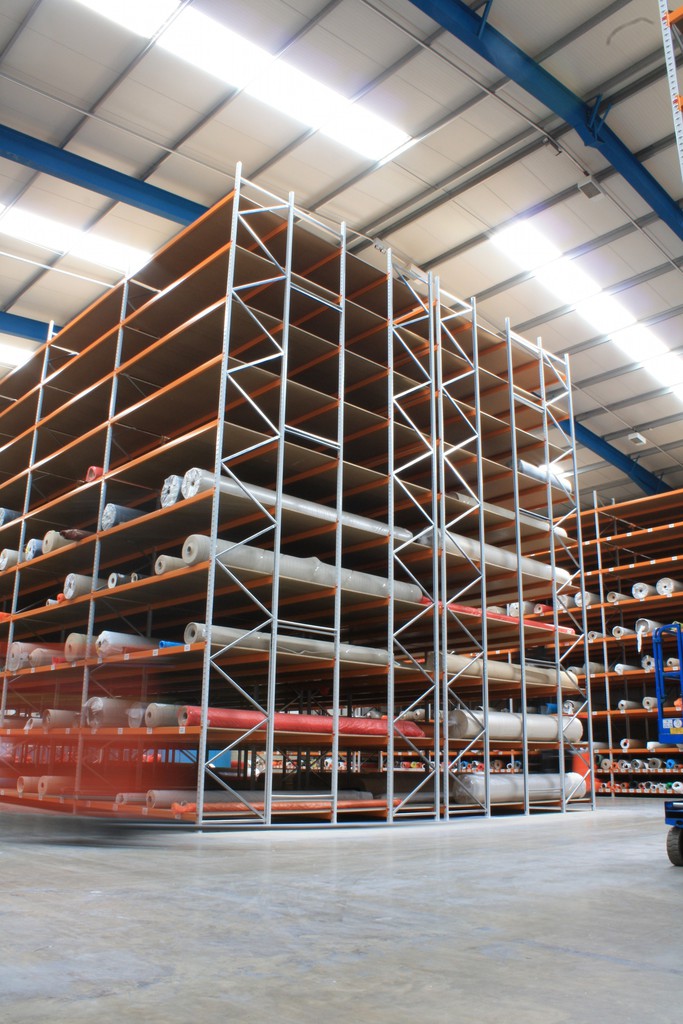 In addition to maximising space utilisation, it was important for Designer Contracts to maximise the operational efficiency. They viewed the new warehouse as an opportunity to re-assess their methods.

Taking deliveries from their own fleet of vehicles in addition to those of suppliers, the unloading and loading process can be time consuming, with only one roll of product moved at a time. SEC Storage therefore designed a simple Pick & Deposit (P&D) VNA style solution to the end of the carpet racking. Utilising Armco barriers, this would be used as a holding area when unloading vehicles to temporarily store the entire load. This is then moved either directly to the cutting machines, or into more permanent storage on the racking system.

With rolls of carpet measuring up to 5 metres in length, the loading onto the racking system can be a precarious task for the forklift operators as they are so far from the end of the load when approaching the racking system. Chipboard timber decking was installed throughout to support the long loads on the racking system and a specially designed "stepped beam” was used on the front face of the racking. This meant that the 22mm thick chipboard deck wouldn’t interfere with the loading, essentially sitting within the beam. From a safety perspective, this means the orange beams act as a clear visual indicator for the forklift operators, rather than beige coloured chipboard that would not be such a visual indicator.

Designer Contracts is the largest floorcoverings contractor in the UK. Stocking floorcoverings including carpet, vinyl and wood laminate, they also offer their customers a bespoke design and cutting service, ensuring all coverings are delivered, ready to install. Storage requirements therefore extend beyond standard size rolls of carpets but also bespoke cut rolls and SKUs of product associated with each house builder and their specifications.

"It unfortunately transpired that we would have to begin to take occupation of our new warehouse sooner than expected,” says Graham. "This would unfortunately affect the 6 to 7 week build time. But SEC Storage and their installation team were more than accommodating.”

So that Designer Contracts could take occupation and stock the racking system, SEC Storage devised a phased installation which would enable the handover of the warehouse in stages.

Not only was the installation phased but so was the delivery of materials which was crucial to the success of the handover. The pallet racking materials were delivered from the local Milton Keynes manufacturing facility according to the racking layout over a three week period. This meant no materials were stored on site taking up valuable space. In essence, materials arrived as they were required. Deliveries commenced with the carpet racking, with all other racking elements to follow as they were not crucial to Designer Contracts operation.

Subsequently, Designer Contracts was able to phase in the use of their new warehouse and begin the bespoke cutting process almost immediately upon completion of the first carpet racking area.

"Not only did SEC Storage provide a design that would maximise space utilisation and offered unique solutions to increase our operationally efficiency, but their project management and flexibility around our desire to take occupation of the new warehouse was exemplary,” concludes Graham Kempton.