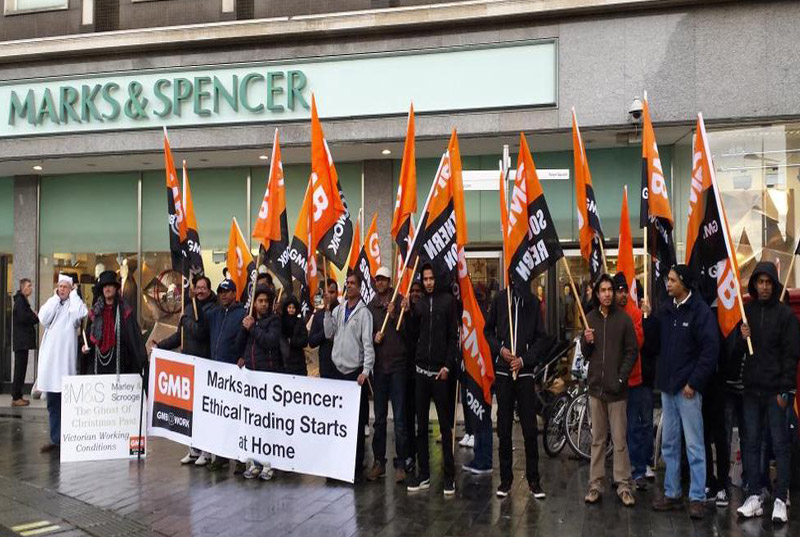 Logistics partner DHL, as well as two recruitment companies, are also being pursued by GMB.

The union claims 240 members employed as agency workers at the Marks and Spencer distribution centre in South Marston, Swindon are paid around £2 per hour less than warehouse staff directly employed by DHL doing the same job. Many of the agency workers have worked at the site for several years.

DHL took over the contract to run the site from Wincanton in January 2015.

The legal claims relate to the Agency Worker Regulations, which came into effect in 2011, and which guarantee equal pay for agency workers after a qualifying period of 12 weeks. A loophole in the law, known as the Swedish Derogation, allows employers to evade these provisions for equal pay, by guaranteeing a few hours of work each week.

The basis of GMB’s legal claim is that the application of the loophole in this instance is unlawful.

GMB regional organiser Carole Vallelly said "On examination of the specific contracts of employment of our members used on this M&S site, we believe that the terms of these contracts seeking to avoid equal pay are unenforceable, and the attempt by the employers to evade their responsibilities to their staff is not only unethical but also unlawful.

"Our members argue that over a period of years, the employers on this site have played fast and loose with the law, not only failing to follow the Agency Workers Regulations, but also failing to follow TUPE regulations that protect workers when they are transferred between businesses.”

GMB is also trying to shame M&S onto making concessions to the agency workers. M&S has an explicitly ethical policy and GMB argues its treatment of agency workers at the DC in Swindon runs counter to this.

Vallelly continued: "The South Marston site is operated wholly for the benefit of Marks and Spencer. It is clear that the treatment of these workers is in breach of both M&S' Code of Ethics and Behaviour and also in breach of M&S' Global Sourcing Principles.

"The use of so-called Swedish Derogation contracts is also seemingly in breach of the Global Sourcing Principles which states that temporary labour arrangements must not be used to avoid obligations to workers under labour laws and regulations.”

The dispute highlights the complexity of the warehouse labour market as companies seek to cut costs.

In this case, M&S owns the DC. It contracts the running of the site to DHL. It in turn recruits several hundred workers through the recruitment agency, 24-7 Recruitment Services. These workers have an employment contract through a company called Tempay.

DHL provided a statement to Handling & Storage Solutions which said: "The practice of Swedish Derogation is widespread in the logistics industry. As the matter is now subject to legal proceedings it would be inappropriate to comment further at this time."

Agency workers are commonly used in warehousing and logistics. Here, logistics professional Carey Jebb asks should they get the same pay and conditions as permanent workers?