The future of driverless lorries?

A senior member of Institute of Electric and Electronic Engineers discusses the technology that could make driverless trucks an everyday reality. 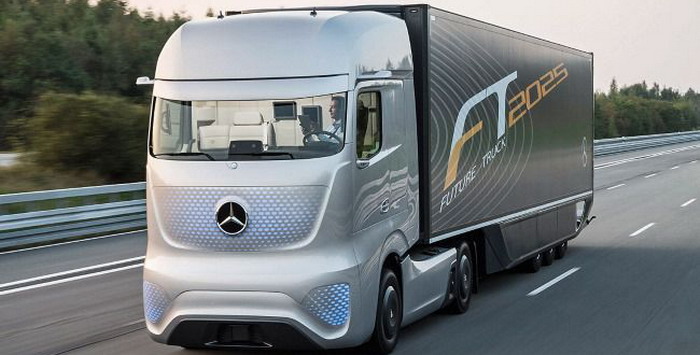 The lack of road-worthy public highway driverless trucks at present is similar to the lack of driverless cars – predominantly high costs and public fears. However, one could argue that a natural area for driverless vehicles to start in some ways is the introduction of driverless trucks as strict regulations govern the amount of driving time per day truckers can do. Trucks parked up do not earn profits. The public win as well as the more goods which are transported in modern societies the cheaper they can be. Ultimately, we can expect few traffic accidents, due to an autonomous system's increased reliability and faster reaction time compared to human drivers. Remember, Google self-driven cars have managed over 700,000 autonomous miles without any collisions. We can expect increased roadway capacity and reduced traffic congestion. The reduction in congestion comes about because of the reduced need for safety gaps and being able to better manage traffic flow.

Some autonomous truck vehicles are being used on a daily basis in some sectors such as mining. For instance, since December 2008, Rio Tinto Alcan has been testing the Komatsu Autonomous Haulage System which is the world's first commercial autonomous mining haulage system in the Pilbara iron ore mine in Western Australia. Rio Tinto has reported benefits in health, safety, and productivity. In November 2011, Rio Tinto signed a deal to greatly expand its fleet of driverless trucks. Other autonomous mining systems include Sandvik Automine's underground loaders and Caterpillar Inc.'s autonomous hauling.

Daimler are developing the Mercedes-Benz Future Truck 2025 in the belief that drivers of the vehicle will be "transport managers" rather than truck drivers. The vision for these driverless trucks is that they start, and organize their collection, transport and delivery at their destination autonomously. It is hoped that they will react flexibly to spontaneous situations like traffic jams by negotiating new delivery times with customers. Nissan and other vehicle companies are also testing similar systems.

We can also expect to see much more real-time integration between national intelligent transport infrastructures and systems such as sat navs in trucks; traffic signal control systems; parking information, weather reports, bridge de-icing, container management systems; variable message signs; automatic number plate recognition or speed cameras to monitor applications, such as security CCTV systems and similar. We can also expect to see electric trucks. Not all delivery vehicles have to be giant transporters. In fact the main driverless trucks introduced will be much smaller. This reduces risk for everyone. Therefore a key part of future intelligent transport infrastructures will be support for charging stations especially as they move from being public led to private push. This is crucial as currently many electric truck charging stations are part of networks run by service operators however quite often users can only charge at points that are part of their network and this lack of roaming between networks is inhibiting electric vehicle sales.

"Daimler are developing the Mercedes-Benz Future Truck 2025 in the belief that drivers of the vehicle will be transport managers rather than truck drivers."

Again, to return to why they are not all over the roads to date… well, one of the major inhibitors is the lack of trust and collaboration between the major auto manufacturers. Yes, Ford, General Motors, Toyota, BMW and all the other leaders) are all part of the Vehicle Infrastructure Integration Consortium which is striving to deploy the infrastructure of tomorrow however in reality they all go back to their workshops and continue to produce proprietary protocols and systems.

A problem of course will be managing fleets of driverless trucks from central remote control rooms. In order to ensure more efficient traffic management of trucks, guidance systems have to become generally more sensitive to traffic flow and suggest alternative paths to these vehicles. We could imagine a future where a "cloud” system will know where trucks are, and what volumes of traffic exist in a particular area. Such a centralised system would also be able to control traffic lights and road signs according to traffic flow. In practical terms this intelligent distributing computing could lead to efficiencies rather than having pre-programmed rules in every single venue or device. To make this happen we need infrastructures and standard protocols that will allow vehicles, devices and people to communicate with a central processing system. Currently traffic delays mean financial losses, frustration, missed opportunities and sometimes danger. The new landscape of transportation systems points to flexible routes mapped by computational algorithms that can considerably improve mobility. The creation of technological prototypes and infrastructures is important in this pre autonomous vehicles era. It is likely that we will progressively use such intelligent transport networks for preparing the logic and rationale behind the first autonomous vehicles. Wireless sensor networks combined with cameras are becoming a common instrument in detecting traffic flows, speed, and the continued occupation of the road. Sometimes they are combined with other sensors such as magnetometer or power sensors, for traffic detection. The advantages of WSNs are that they can monitor and evaluate roads automatically and continuously, with little human effort and work 24/7 even with poor weather conditions, when there is fog or presence of dust in the air. They are also low power and quite cheap. Regarding traffic lights, again sensors can help here. The most common traffic signalling system worldwide is the timer based system. This involves a predefined time setting for each road at an intersection. Works OK for light traffic but to cater for busier incoming lanes, a dynamic traffic adaptive system is proven to work much better. These systems therefore rely on a variety of sensors to determine which routes require greater priority and ultimately right of way to speed traffic flows.

Google are in talks with automotive manufacturers to start work on production vehicles, however they are still projecting at least 5 years into the future before they can be considered to be in a full production run. One problem with the famous Google self-driving vehicle grand experiment is the sheer amount of computing power used in both the actual driving and the pre preparation stage where streets in Mountain View are mapped in great detail recording measurements such as the height of curbs and road signs. It is simply the question of whether they are not "playing fair" as to date only a few thousand miles of road have been mapped as opposed to the thousands of millions of miles of road worldwide that need to be done. Having said that, there are many of us who never would have predicted Google Street View on such a large scale was possible - so it is not inconceivable that Google map each street in splendid detail for future autonomous vehicles. It has got to be remembered that Google's self driving vehicles have been in no collisions in over 5 years. That is an impressive statistic. Previous attempts to commercialise automatic vehicle control have failed because they required dedicated infrastructure and vehicles that must remain entirely under automatic control. New technologies, like CMOS radar-on-a-chip and all-weather LIDAR, will lead to more intelligent, more reliable vehicles. These next-generation autonomous vehicles will bring man and machine together harmoniously, letting you do the driving but taking over if you got into trouble.

"Ford, General Motors, Toyota, BMW and the other leaders are all part of the Vehicle Infrastructure Integration Consortium which is striving to deploy the infrastructure of tomorrow however they all go back to their workshops and continue to produce proprietary protocols and systems."

Security should not be an afterthought when it comes to driverless trucks (as well as cars). There is of course a worry about hackers controlling vehicles in different scenarios such as having fun with the routes being taken, disabling the vehicles ignition, to overriding braking systems. Akin to the early days of the Internet, Security has not received a great deal of attention to date from vehicle manufacturers. Functions such as the speed control, steering and brakes are all located on a separate vehicle network, there is still interconnectivity between both vehicle network backbones so that a breach in one might theoretically cause havoc in the other. Truck manufacturers need to consider any vulnerable entry points and insert firewalls to restrict access to integrated systems such as any entertainment system and on-board diagnostics port. A risk associated with rolling out technology in vehicles as opposed to other platforms e.g. homes, offices is the potential of distraction leading to accidents due to poor design or malfunctions in the new product. Technology experts outside of aviation and medical products tend not to follow stringent testing methodologies but lazily rely on fixing problems as they arise. A mis-configured service in a fast moving truck however can lead to death. A number of factors may lead to change however. The motivation to build rigorous and secure systems should be there because it is quite possible that all involved in its design could be held liable if a defect caused or even contributed to a collision. And if computer programmers eventually play a bigger role in the way trucks move than drivers do, it is likely manufacturers will build the cost of litigation and insurance into their trucks.

Vehicle manufacturers are responding to the security question in a number of ways. For instance, they are forming a consortium  called the Auto-ISAC to combat vehicle hacking with the Alliance of Automobile Manufacturers and the Association of Global Automakers. This  consortium will allow them to share information on attempted vehicle hacking so that they can plan to create secure firewalls for cloud-based data links to trucks as well as for vehicle-to-vehicle communications. There is also an European Union (Eu) funded consortium - (EVITA) E-safety vehicle intrusion protected applications which aims to design, verify, and prototype an architecture for automotive on-board networks where security-relevant components are protected against tampering and sensitive data are protected against compromise.

Dr Kevin Curran, is a senior member of the IEEE (Institute of Electric and Electronic Engineers).