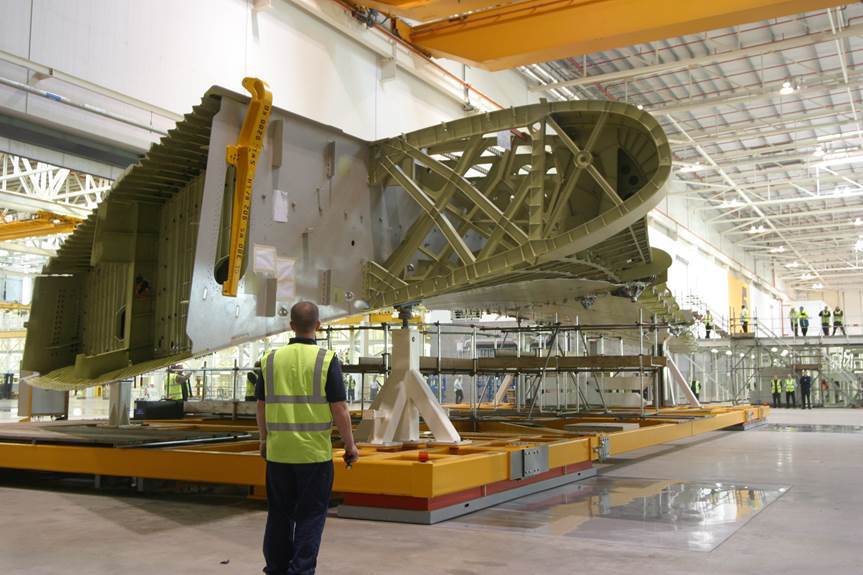 Engineered products in the manufacturing sector are getting larger and heavier. Aircraft wings are longer, the bodies are wider, power transformers are heavier and electric motors for power generation are larger than ever. Nuclear reactor components are as bulky as they’ve ever been, and massive excavating vehicles for mining and road construction are being constructed to carry ever-larger payloads.

Although the origins of moving assembly lines can be traced back almost 700 years, it was Henry Ford’s company that brought the concept to life only 100 years ago. Enabling dedicated teams of assembly workers to become supremely efficient and focused on specific tasks, with the required parts delivered to precise locations, has been considered the most efficient method of assembling complex mechanical and electrical machinery for over a century.

Until relatively recently this concept applied to lighter products such as cars and white goods that could be transported by either overhead or ground-supported conveyors. During the '70s and '80s some industries, such as the tractor and excavator lines in Europe, Scandinavia and the US, saw benefits in the same concept and looked to the material handling market place for solutions. Air bearings and skates, invented in the '60s, became accepted as a viable product to carry these larger loads and suddenly it became possible to move 30t vehicles down an assembly line with ease. Heavy power and electrical manufacturers also saw the benefits of releasing cranes for specific overhead assembly use, and 200-300t products such as diesel engines and transformers then started to float down the production line.

Heavier and larger loads are currently being designed and material handling manufacturers are certainly keeping pace with suitable equipment. As an efficient method of production, moving heavy assemblies rather than the workforce has become the accepted standard throughout most industries, and safety in the workplace, which was almost non-existent 40 years ago, has driven the methods of controlling these leviathans. The modern air-bearing transporter or Mover is now equipped with on-board processors that receive signals from proximity sensors, radio controllers, laser scanners and wire-in-floor or painted line detectors, to ensure they follow the intended path whilst minimising risk of injury to personnel or damage to surrounding equipment. It is now possible for a single operator to manoeuvre a 300t transformer to an accuracy of millimetres, move it sideways or rotate it about a virtual centre, using radio control to give him or her total freedom to view any side of the moving load. Laser scanners will alert the operator to any close encounters and, in an emergency, stop the operation. A wire in the floor, laid in a shallow groove and covered to maintain a smooth finish, can transmit a guidance signal for detection by the Mover, thus relieving the operator of any steering responsibility. The same effect can be achieved using an optical or laser scanning system.

Moving a heavy load on air requires a paper-smooth floor and a permanent air supply; these unavoidable features can be an inconvenience but are regularly considered worthwhile sacrifices to gain the advantage of moving such large products through an assembly process. However, recognising the potential for rejection of air film movers as a suitable solution because of these floor and air requirements, some material handling specialists are now providing an alternative: heavy load battery-powered automated guided vehicles. Using a combination of modern battery technology, low-profile high-capacity wheels and motors, and incorporating the same safety features described earlier, loads of up to 100t can be programmed and guided automatically through a complex series of movements to suit a variety of assembly processes. These AGVs are obviously unhindered by trailing wires or cables, and the integral battery system can be charged automatically while the units are stationary, giving them a theoretically unlimited range.

For many years a Finnish company, Ab Solving Oy, has pioneered both air film and AGV technology and currently leads the way in developing larger and heavier capacity products to meet the ever-growing market. Solving Ltd, a wholly-owned subsidiary based in Newbury, Berkshire, sells, installs and services the Finnish products in the UK and Ireland. Using a network of service and repair engineers, Solving Ltd is able to support a growing customer base with rapid response and spares backup. Around 100 UK customers are currently benefiting from Solving’s enviable reputation and the manufacturer is enthusiastic about its prospects for the coming decade. Henry Ford’s moving line is still acknowledged to be the most efficient method of assembly and, with Solving’s innovative technology, this process is available to progressive industry regardless of size or weight.