In order to gear the loading process to the accelerated warehouse processes, Zetes designed a new scanning system on Coca-Cola's forklifts in Dongen, the Netherlands. 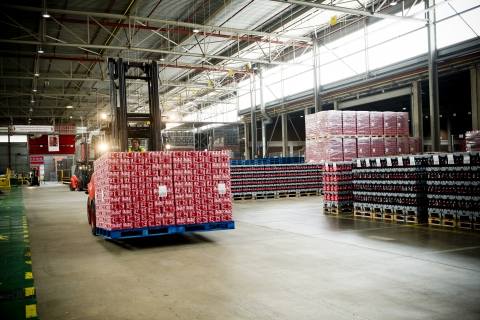 Zetes also advised on the design of the forklift attachments together with the company Durwen. Coca-Cola has since reduced loading time by an impressive 6 minutes per lorry, whilst also improving safety and reducing the number of errors.

Coca-Cola's production plant in the Netherlands (Dongen) supplies the distribution centres of large supermarket chains, retail and catering businesses across the country. The company produces 6 days out of 7, 24 hours per day, in teams of 20 employees. During each shift, an average of 50 to 80 lorries are loaded, depending on the weather - in warm weather, more lorries are loaded due to the higher demand for cold drinks.

At the point of shipping, Coca-Cola had to overcome a crucial challenge with regard to speed and safety. Pallets with drinks are packed and labelled with a bar code onto a conveyor belt. Sixteen forklifts drive back and forth to collect the pallets and load them onto the correct lorry. The forklifts were able to load up to three pallets, but could only scan two of these. If a third pallet was picked up, the driver had to get out of the forklift and scan it manually using a hand-held scanner. As this led to time loss and dangerous situations, the automated scanning process required a new solution. 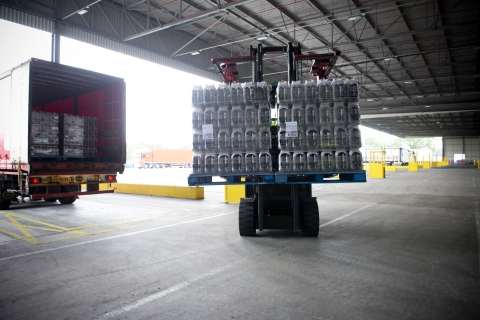 Coca-Cola looked for new forklifts that were able to carry more pallets and also had the ability to scan them automatically.

Zetes developed a scanning system on the new Motrac forklifts and also advised on the design of the forklift attachments. With this new system, one type of forklift can either carry 1 euro pallet, 1 block pallet, 2 euro pallets, 2 block pallets, 3 euro pallets or 12 'Dollies'. Zetes equipped each forklift with three moveable, very robust scanners and sensors to the front. The scanners were also provided with a stainless steel protective cover.

The scanners are able to read the labels on the pallets directly when driving up to them, given that due to the moveability of the scanners, they can read both horizontally and vertically. The forklift driver is then sent a message with the number of the lorry onto which the pallets must be loaded. All data is automatically forwarded to the Coca-Cola SAP system using the application developed by Zetes. The ingenuity of the application lies in its capacity to carry and detect up to 3 pallets, subsequently using the necessary scanners and to transport the pallets to the lorries without any problems.

Kees Kroes, logistics warehouse transport manager at Coca-Cola Enterprises Netherlands, explains the advantages of this system: "The scanners can now read the labels regardless of their position on the pallet, the accuracy has improved from 98% to 99.9%. Furthermore, thanks to the installation of the automatic scanners and sensors, the loading process has been considerably faster, knocking off 6 minutes per lorry. The safety of the loading process, as a major priority, has also improved. When loading three pallets, the driver of the forklift no longer has to get out to scan the third pallet manually. The risk of accidents has therefore been reduced to an absolute minimum."