Proposals for a new multi billion pound road link across the River Thames between Essex and Kent have been announced. 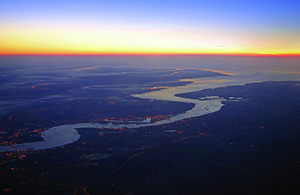 The new road will be built to relieve congestion at the existing Dartford Crossing.

In 2013, two locations were shortlisted for a new bridge or tunnel across the river: one near the existing Dartford Crossing (known as Option A) and the other linking the M2 with the M25 via the A13 (known as Option C), with a possible further link to the M20 (Option C Variant).

Since then, Highways England has been carrying out detailed work with a wide range of stakeholders to assess the shortlisted options and develop possible routes at each location. This evaluation is now complete, and Highways England is recommending a new road crossing at location C through a bored tunnel.

The proposed scheme would run from the end of the M2, crossing the river just east of Gravesend and Tilbury and joining the M25 between junctions 29 and 30. It will be the first new crossing of the Thames east of London since the Queen Elizabeth II bridge opened at Dartford 25 years ago.

The Freight Transport Association is urging the Government to press ahead quickly.

Malcolm Bingham, FTA’s Head of Road Network Policy, says it is vital that a schedule for delivery is put in place to prevent grid-lock on the existing routes.

“Congestion at the Dartford Crossing is predicted to reach pre-Dart Charge levels by 2020 and the Blackwall Tunnel is a real pinch-point. Congestion needs tackling now and our members want to see plans in place to deal with future development and growth, not just temporary sticking plasters that don’t tackle the real issue."

The FTA also cautioned the planned new tunnel under the Thames must have a robust system in place for handling commercial vehicles to keep freight traffic flowing.

Bingham said: “We recognise that a tunnel will have less environmental impact than a bridge but it brings its own challenges for the freight industry.

“We urge Highways England to ensure that construction includes putting in place safety systems to allow these vehicles to move freely through the new tunnel without having to stop.”

“For the road haulage industry, time is money and this proposal comes as good news to members of the RHA,” said RHA chief executive Richard Burnett.

“Our members report that the current crossing is usually busy and frequently congested. Therefore we are pleased to see that the consultation paper acknowledges that the new route, opening in around 2025, is likely to lift the local and national economy by facilitating the speedy transportation of goods, reducing congestion, curbing greenhouse gas and other emissions, as well as bringing some road safety benefits.”