Smart highways demo in the Netherlands 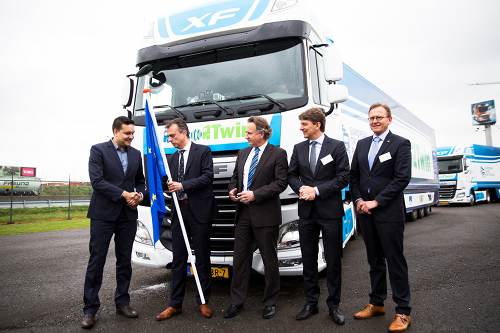 The demonstration is part of the European Truck Platooning Challenge, an event organised by the Dutch Ministry of Infrastructure and the Environment, that has trucks driving in columns (platooning) on public roads from several European cities to the Netherlands. The challenge is designed to bring autonomous platooning one step closer to implementation by showcasing economic, traffic management and safety advantages. It also addresses the need for legislation and standardisation of Intelligent Transportation Systems (ITS) across Europe, as current rules and regulations regarding speed and distance vary between countries.

Under the EcoTwin consortium, NXP, DAF, TNO and Ricardo joined forces to make this demonstration possible. The core of the ‘EcoTwin’ technology setup is a sophisticated vehicle-to-vehicle (V2V) communications solution, RoadLINK, developed by NXP. It uses the wireless communications standard IEEE 802.11p combined with NXP radar technology to empower the trucks within the platoon to securely exchange information in real time and automatically brake and accelerate in response to the lead truck. The high speed of communication and responsiveness of NXP RoadLINK technology allows extremely tight distances and truly synchronous driving between the platooning DAF Trucks: To demonstrate autonomous acceleration and braking, the planned distance between the vehicles is slated for 0.5 seconds – which, when traveling at 80 kph (50 mph), translates to a distance of only 10 metres (30 feet). The responsiveness of the trailing truck within the platoon is estimated at 25 times faster than the average human reaction time of one second - saving critical time in case of emergency braking.

The RoadLINK communication system designed by NXP is built into the mirrors of the DAF Trucks participating in the platoon. The redundant NXP V2V system design with four secure channels ensures extremely reliable communication. In addition to providing the platooning commands, it provides real time video and bi-directional audio communication between the two vehicles. The audio allows the drivers to talk to each other without relying on other communication channels, such as cellular networks. Furthermore, the V2V powered camera in the lead truck streams what it “sees” to the driver in the trailing truck, providing a clear look at the road ahead.