Skechers was forced to automate the greater part of the processes in its distribution centre because of strong revenue growth. 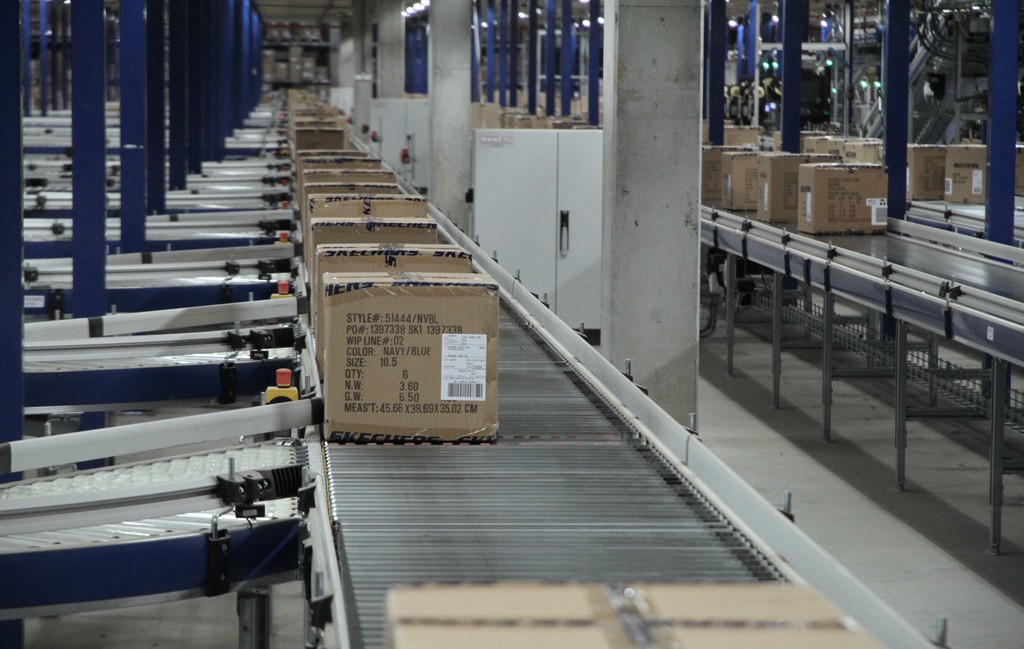 The result is a system with more than 2.5 kilometres of conveyor technology supplied by Inther. This will be followed by another two kilometres of conveyor and two natrix sorters in a following project. The system enables Skechers to facilitate three totally different flows of goods: the web shop, the stores and the wholesale.

Sophie Houtmeyers, Skechers’ VP of distribution operations says: “In 2002 we started with a distribution centre of 25,000 square meters in Liège. In 2009 we doubled the area, and again in 2015."

In order to accommodate the growth Skechers has decided to not only extend the floor area, but also to mechanize and automate the processes. With the existing, largely manual operation, the limits of the possibilities were reached. “We were accustomed to drive picking trucks through the corridors, to maneuver past the 30,000 stock keeping units and to collect the orders. This worked fine, until rising volumes forced us to employ so many people that they got in each other’s way," says Houtmeyers.

Skechers decided to implement a new concept. Instead of collecting all orders one by one using order picking trucks, the shoe manufacturer intelligently decided to combine the orders in to waves. The WMS of Manhattan Associates calculates the required quantity of every article and creates order picking tasks based on these calculations. If the wave is started, the shoes are sent to a Beumer sorting machine where the shoes are packed in boxes. When this is done, the Inther conveyor will transport the boxes to the dispatch department.

The 2.5 kilometre long conveyor starts in the pallet racking area, on which employees place the collected cartons containing shoes. The conveyor transports the cartons upwards, in such a way that vehicular traffic is not impeded, and then brings them to a fork further down the building. From here the cartons, those which can be delivered in their entirety, go directly to the dispatch department. The cartons with shoes, which have to be distributed across multiple orders, are transported over a roller conveyor to a large Beumer cross belt sorter with five hundred destinations.

The cartons which go to the sorter are automatically allocated towards the eleven input stations. Employees will be ready at these stations to open the cartons, remove the appropriate number of pairs of shoes and put those on the infeed conveyor of the sorter. When the carton is empty, employees will place them on a large conveyor belt that runs straight above the imports stations. This transport belt, which is also supplied by Inther, transports the carton towards a carton container. The conveyor will transport the carton to a shelving area in case it’s not completely empty. In this area the “residuals” are temporarily stored until another order for that model, size and color is received.

The cross belt sorter ensures that all shoes are sorted per order towards one of the five hundred destinations. When the light above a destination indicates that an order is complete, an employee will place the shoes in a shipping box, which is then placed on a conveyor belt. This conveyor belt, again provided by Inther, runs underneath the sorter and brings the boxes past the label applicators which automatically affix a shipping label to the box. After this, the boxes are transported to one of the five semi-automatic taping machines.

A roller conveyor provided by Inther will finally transport the boxes to the dispatch floor. On this floor, employees will palletise the boxes per order. Three exits lead towards telescope conveyors which will transport the shipping boxes directly into the truck. This concerns the shipments which are delivered by parcel carriers and are loosely stacked in trailers.

The concept comes from the pen of Wynright, the American system integrator which guides all of Skechers’ mechanization projects worldwide. “The concept is a mix of our experiences in the American distribution centre of 180,000 square meters, of new technologies that have appeared on the market in recent years and of the philosophy of the suppliers of the various components,”says Houtmeyers. She adds that all components, including the conveyors, are controlled by Pyramid, a Warehouse Control System which is integrated in the WMS of Manhattan.

Wynright is also the party that has chosen Inther, in consultation with Skechers, as the supplier of all conveyor technique. “Wynright has written to all suppliers and has assessed their continuity and capacity, price and service. The fact that Inther was chosen has to do with the theoretical capacity of the conveyor system and the level of the technique. And of course, price always plays a role. This doesn’t mean that we chose the cheapest supplier, it means that we chose the supplier with the best price/quality ratio.”

The implementation of the complete system, including a mezzanine of 6.000 square meters, started in December 2014. Seven months later, in June 2015, at the beginning of the high season, it was ready to be used. This required a certain attention, Houtmeyers knows. “We work with a team that has no experience with mechanisation, PLC’s and control software. This means that we had to train everyone. An additional problem is that we started working in three shifts immediately, so we had to divide the available knowledge on three shifts, “says Houtmeyers, who adds that Skechers hasn’t missed a single order despite of this. “Our customers haven’t noticed anything.”

The system now runs 24 hours a day, five days a week. “In the high season we even work six days a week,” says Houtmeyers, who indicates that the system still needs some fine tuning here and there. “The system doesn’t provide the capacity that we want yet; we are still ten percent removed from that capacity. Fine tuning will take time, time which we still have. We don’t need the theoretically achievable capacity yet, but if we continue to grow in the future, we will need it. ”

What makes the new system special is that it is suitable for all three flows which Skechers handles from Liège: the flow for retailers and wholesalers, the flow for web shop customers and the flow for their own stores. One wave can contain orders from all three flows, from a one-line web order to an order from a wholesaler who has ordered a full truck. “Another advantage is that we are now able to handle an order increase of 30 percent in the same building. Whether or not the system also leads to a higher productivity, we cannot say yet.”

Is Skechers now ready for further growth? Houtmeyers smiles. “With this system we thought to handle the growth in the next few years, but the growth is faster than we expected. This is why we are already working on the next automation project.”

Inther has also been retained for the next automation. An additional 2 kilometres of conveyor will be added to the existing 2.5 kilometres. These conveyors will transport Skechers’ shoes to two natrix sorters which will also be implemented by Inther.

Houtmeyers: “The fact that we have chosen Inther again is proof of the confidence we have in their products and services.”