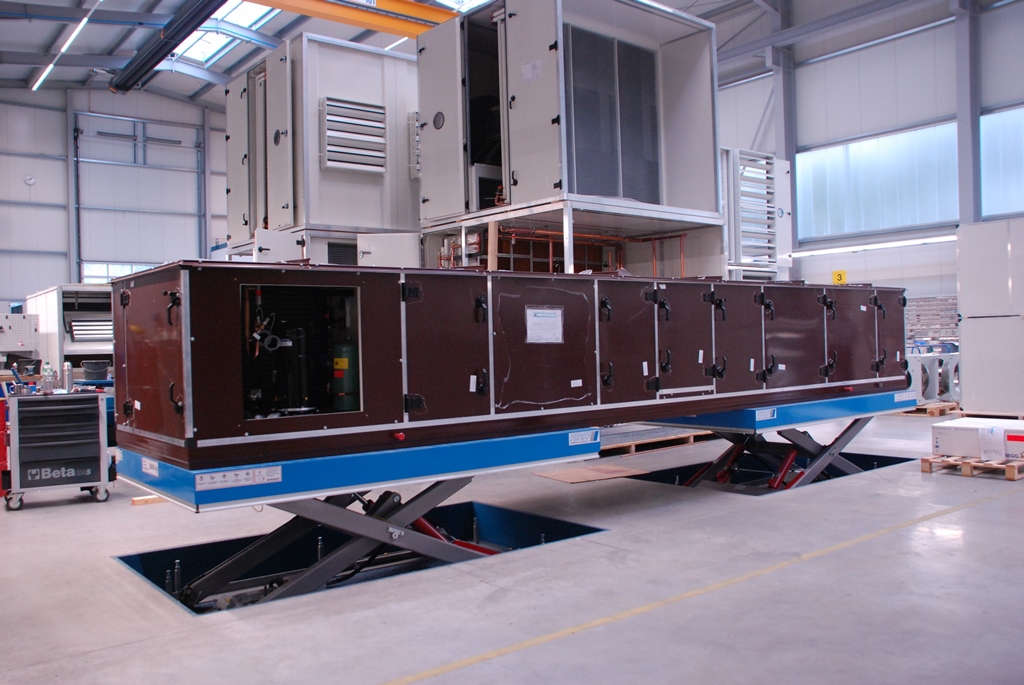 The equipment was installed at an early stage in the construction of Hansa's new production building. With their custom dimensions, these tables now assist the Hansa production engineers in their task of producing the systems that can sometimes be metres long and weigh tonnes. The air conditioning systems from Hansa are dimensioned according to the particular job and can be up to several metres long.

In the production of its systems, it is therefore highly important for Hansa that the technicians can assume a comfortable position when working on the large industrial plant housings. This involves adjusting the work pieces variably in line with the assembly situation – as is possible with the HTA-E industrial plant lifting table from Pfaff-silberblau. At the press of a button, the lifting table scissors raise the platform along with the semi-finished system progressively to the required height. For Hansa, the HTA-E is designed for a maximum load of 2 tonnes, which can be lifted with uniform load distribution in less than one minute by up to 1600mm. For particularly long work pieces, two tables next to each other are used – whereby the specially adapted control ensures the synchronised and as such safe adjustment of both lifting tables along with their load to an ergonomic working height.

The platforms of the HTA-E lifting tables from Pfaff-silberblau are made from smooth, 6mm thick steel plate and, in accordance with the specifications from Hansa, measure 2750mm long and 1500mm wide. The tables themselves measure 300mm high, but can be lowered down level with the floor to permit user-friendly loading. At the same time, a safety contact-rail beneath the platform reliably ensures that the table cannot be lowered if, for example, an employee is standing with their foot either too close to or even over the edge of the pit. Further safety features of the HTA-E industrial plant lifting tables include the pipe rupture valves and maintenance supports in addition to the upper limit switch, which even in the unlikely event of a material failure, reliably hold up the load.

The platform transports payloads of up to 90 tonnes and is primarily used in the production of aeroplanes, wind turbines and rail vehicles, in which extremely bulky and heavy components have to be transported and positioned.. The lifting and stabilising of the load are taken care of by a lifting solution comprising worm gear screw jacks from Pfaff-silberblau, which have been developed by Columbus McKinnon expressly for this demanding application.

Four to eight electric, synchronised screw jacks are used per carriage. Each of them is equipped with a motor, anti-turn device, lift limitation by means of two initiators, integrated guide system and absolute encoder. The latter ensure the synchronisation of the worm gear screw jacks using the customer's control unit for a uniform lift of max. 250 mm also when the vehicle is in motion. Increased operating reliability is ensured by safety nuts, which also offer a facility for monitoring wear. Each and every one of the Pfaff-silberblau lifting screws supports a dynamic load of up to 100 kN or a static load of up to 150 kN.

For KUKA Robotics, it was essential to ensure that the lifting solution had an extremely low height and a compact design, as it had to be integrated into a very tight installation space in the heavy loads carriage. The compact worm gear screw jacks from Pfaff-silberblau easily satisfy this design requirement, for example by dispensing with external guides for the screw jack. This task is performed by a special guide pillar construction, which supports transverse and axial forces.