The car maker has employed chargers made by Austrian specialist Fronius to charge the traction batteries used in its forklifts. 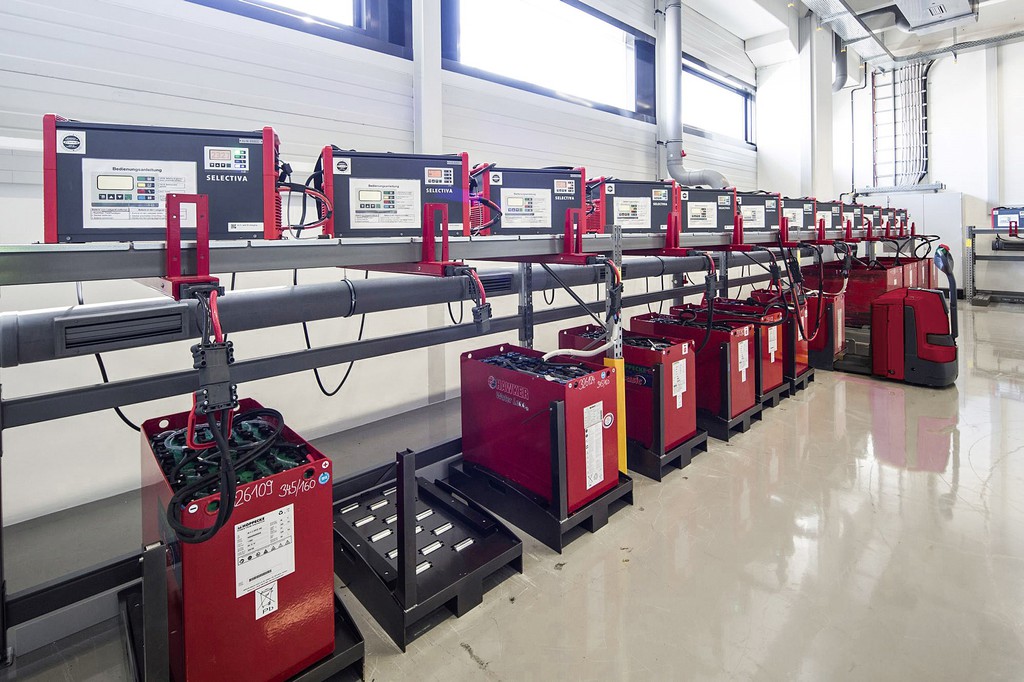 Around 2,000 electrically powered forklift trucks at the headquarters of AUDI AG in Ingolstadt in Bavaria ensure a streamlined and productive flow of materials. For the past two years, the car maker has employed chargers made by Austrian specialist Fronius to charge the traction batteries used in its forklifts. With their innovative Ri charging process, these chargers reduce power consumption as well as CO2 emissions, while also extending the service life of the batteries.

More than half a million cars a year, more than 43,000 employees and a site of approximately 274 hectares: the headquarters of AUDI AG in Ingolstadt, Bavaria is the Group’s largest production plant and the second largest car factory in Europe. Established originally in Zwickau and now part of the Volkswagen Group, the company has been delivering cars to all parts of the world since 1949. An Audi of the A3, A4, A5 and Q5 series, including all their derivatives, rolls off the production line in Ingolstadt every 30 seconds - that amounts to more than 2,500 cars every day.

Logistics is one of the most important factors contributing to the smooth running of the plant; a factor that has grown in significance as the number of models and variants has increased. It has also become far more complex, and yet even more powerful. Around 2,000 forklift trucks are in operation in the factory halls. “Our fleet includes platform stacking and low-lift trucks, counterbalanced lift trucks, reach trucks, high-rack forklifts, order picking trucks and tugger trains,” explains Walter Ferstl, who looks after factory logistics planning at Ingolstadt.

Audi decided to use forklift trucks equipped with electric drives. These battery-powered forklifts offer numerous advantages compared with their internal combustion driven counterparts: they are far more flexible, quiet, environmentally friendly and require very little maintenance. As the company operates in three shifts and relies on the permanent availability of its stackers, lift trucks and other forklifts, back-up batteries are provided for many of the trucks. The factory has a number of battery charging rooms and stations where drivers can swap their empty traction batteries for fully charged ones in a matter of minutes.

One of these stations is in Hall T of the two-storey, 66,000 m2 freight centre (GVZ), where external companies and Audi sort the incoming goods required for the production process into vehicle-specific baskets, which are then delivered “just in sequence” to the assembly lines. Logistics planner Ferstl outlines the process: “We service the pallet store using battery-powered trucks, while electric tugger trains handle the transportation to the assembly lines.” The charging station in Hall T has about 30 traction batteries consisting of 48 V and 80 V models of varying capacities to cater for the different forklift trucks.

Each battery is connected to a Fronius Selectiva charger. The Austrian battery charging specialist and Ingolstadt’s luxury car maker have been working together for several years. Fronius launched the latest generation of its Selectiva chargers back in 2013, since when Audi has also been using them. “Fronius approached us when they began developing the new chargers to see if we would be interested in collaborating with them,” recalls Ferstl. “This gave us the opportunity to put our own ideas and requirements on the table and incorporate them into the design process.” The result was a solution that now seems predestined to address the demanding conditions at Audi.

The Ri charging process used in the Fronius chargers is a completely new technology. In contrast to the conventional approach, the charging current and voltage do not follow a fixed characteristic, but reflect the internal resistance (Ri) of the battery, which in turn depends on its age, temperature and state of charge. Harald Scherleitner, Head of Division of Fronius Perfect Charging, explains, “This makes every charging cycle unique, which has two main advantages: energy loss during charging is much lower, and warming of the battery is kept to a minimum.” Fronius technology thus helps users reduce the total operating costs of their forklift truck system.

Audi initially carried out some tests on a prototype of the new Selectiva range, the results of which exceeded their expectations: “The Ri charging process not only reduces energy consumption, it also lowers CO2 emissions,” reports Ferstl. “We have therefore been able to take a significant step towards meeting our environmental targets.” The company has set itself the goal of drastically reducing the CO2 emissions of its production sites by 25% between 2010 and 2018 – partly through the introduction of new, more efficient technologies. Audi was also impressed by the handling of Fronius chargers: “They are much smaller and lighter than earlier models, so can be installed without any trouble, take up less space and are easy to use,” notes Ferstl.

The A4 body shop also includes a large charging room containing around 30 Selectiva chargers. Walter Ferstl underlined a further strength of the Fronius solution: “The new chargers are totally flexible with regard to the type of battery as they automatically detect which model the driver has connected. The characteristic adapts automatically according to the voltage, capacity and state of charge, so the battery always receive the optimum charge.”

The display reveals which battery is the coolest

Multi-coloured LEDs on each charger indicate the state of charge of the connected battery at a glance. “Orange means that charging is in progress, green that the battery is fully charged. Blue indicates that it has now cooled down and is ready to use,” explains Harald Scherleitner. The charger display also enables the driver to tell to the minute how long the respective battery has been fully charged. “By always selecting the battery that has been fully charged the longest, and is therefore the coolest, the driver can improve the utilisation of the battery pool and have a positive impact on the service life of the batteries,” reports the Fronius specialist.

One of the greatest strengths of Fronius lies in its user-specific solutions: “It is important from our perspective that we do more than just deliver innovative technologies. We are also keen to adapt them to satisfy the requirements of our customers,” emphasises Scherleitner. This includes providing numerous options, such as an external start/stop button to prevent sparking when disconnecting the charging plug.

Another successful one-off solution can be seen in Audi’s forklift truck workshop, where specialists look after the maintenance and repair of forklift trucks and batteries. This is another area in which Selectiva chargers are used, this time in the form of a multi-level rack that can accommodate three chargers placed one above the other in a confined space. Equipped with an external display, they can easily be read and operated from the front as well as the side.

In the meantime, Audi has deployed more than 300 Selectiva chargers at its site in Ingolstadt. “We have relied on Fronius technology for two years now – and it hasn’t let us down at all,” confirmed Walter Ferstl. “The Fronius chargers impressed us right down the line.”