Rising above the pain

Former warehouse worker Lisa Ramos gave a powerful presentation at the recent FLTA Safety Conference, relaying how her life was turned upside down when a forklift reversed into her. 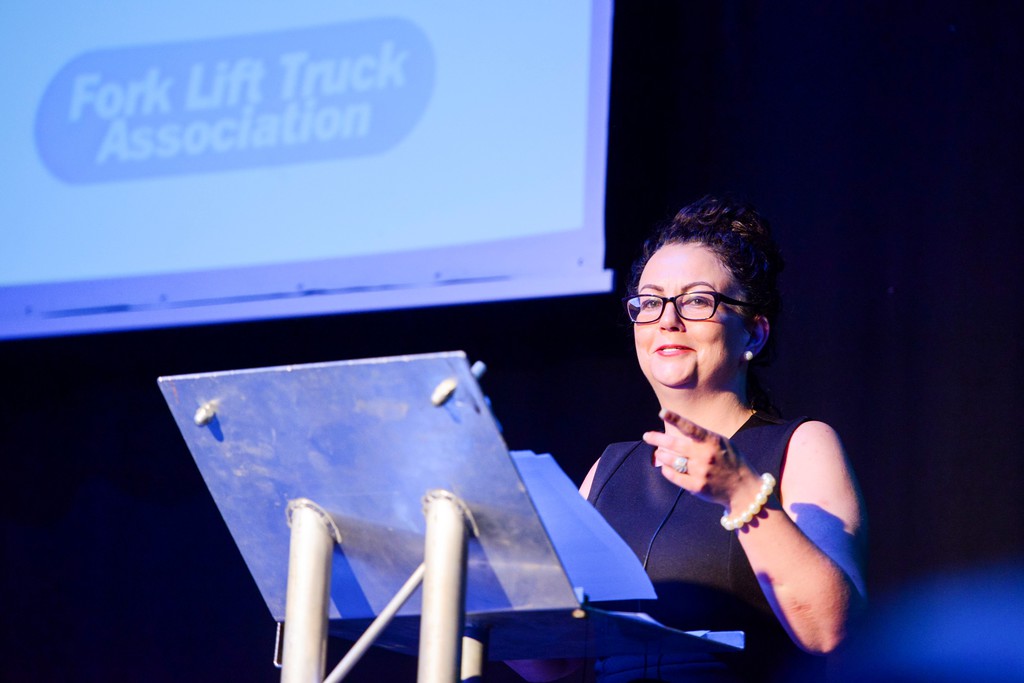 Lisa Ramos worked in the warehouse of large logistics company and had a normal family life. She was 32 years old, lived with her partner, Dave, and had a 13-year-old son.

Lisa began her presentation by apologising. "I'm sorry if i sound robotic, it is because of years of intensive counselling, it's as though I'm talking about someone else."

Lisa described how she was the kind of mum who still sent secret Valentine's Day cards to her son. Indeed, it was her son;s birthday, so she woke up early, and woke her son so she could see him opening his presents. Then she set off for work.

At half three Lisa was finishing off her duties when she walked past containers bays and a reversing forklift ran into her.

"The truck trapped me. I screamed but the driver didn't realise, you can't imagine the pain I was in. The driver drove forward, and skin and fat was torn off my leg, and was hanging off like sheet."

Lisa's colleagues heard her scream and sprang into action, they got her comfortable and called an ambulance.

"I had no idea how bad it was," Lisa explains. "I was told I had a dislocated knee, I was thinking 'I can't cry because they'll give me grief when I get back at work'."

Lisa's partner Dave worked at the same company but on another shift.

Lisa continues: "When he came to pick me up, Dave was crying and I was laughing due to the drugs they had given me. At this stage, I thought I may have a broken leg. I suspect, in fact, at this point the foot was hanging off."

Lisa was told her foot would be amputated but didn't take it seriously. Doctors initially hoped the flesh on her leg would reattach.

"I believe colleagues saved my life, they kept the worst from me at the time. I didn't realise my life was turned upside down, and it gave me time to learn to cope with disability."

Lisa quickly underwent two operations, the second amputating a leg below the knee.

"I was frightened to leave the safety of hospital. The phantom limb pain was excruciating."

Lisa still suffers pain associated with the incident and estimates she has taken more than 50,000 painkillers.

"I felt uncomfortable being sent to an amputee centre. I hadn't come to terms with being called an amputee.

"I found it difficult to prepare this speech but I wanted it to be real and graphic. But to do this I have had to go to a dark space, it has taken years of therapy to get to this stage. For example, today I was photograph don a forklift. My therapist told me one day I would be able to do this, but at one time it would have been anathema to me, unthinkable.

"The hardest part is this stole three years from my son, where I was not present as a parent."

"I went over it, over and over again. How could this happen? I wondered would our family get over this? How was i going to tell Lisa's family?"

Lisa's partner Dave was also devastated by the incident.

"When I arrived, the group leader was crying and no one could look me in the face. I saw Lisa lying under coats and I sat behind her, cradling her head. Her ankle had twisted so many times, it looked no bigger than a 10p piece.

"I went over it, over and over again. How could this happen? I wondered would our family get over this? How was i going to tell Lisa's family?"

The logistics company Lisa and Dave worked for were unhelpful to say the least.

"They didn't care, we got regular visits from the company, but from no one we knew," explained Dave. "They would turn up with clipboards, write everything down. When we asked how the internal investigation was going, they said all parties were equally to blame. Lisa took off her bandages and said 'Don't tell me I was equally at fault' and kicked them out."

The company, NYK Logistics, was successfully prosecuted by HSE, fined £20,000 in 2008, and this gave Lisa and Dave closure as it showed Lisa was not to blame.

Fork Lift Truck Association CEO Peter Harvey and host for the conference made no apology for the difficult content in Lisa's presentation.

"I make no apologies, it was a hard-hitting presentation and it was meant to be. That is why we are here," he explained.

Although progress has been made in reducing the number of forklift incidents and deaths over the long term, FLTA is bearing down hard on stubborn unsafe practices in the warehouse.

The FLTA has unveiled a partnership with the United Kingdom Warehousing Association in a bid to promote forklift awareness among warehouse staff. After all, it is the pedestrians who come off worst in collisions with MHE.

Peter continued: "Fines are now set by turnover of company, we are already seeing heftier fines coming though, giving everyone a powerful incentive to improve. How do we tackle the problem? Go to the root, encourage leadership and ownership. Empower your employees to challenge bad practice."

Stuart Taylor of Mentor Training added: "In some cases forklift operators can be considered more senior and therefore harder for warehouse staff to challenge. We need to break that mentality down."

Patrick Gallagher from The Bury Black Pudding Company also explained how they had implemented an in-house training programme for staff members working alongside fork trucks. Using photos of real life accidents and injuries, BBPC staff were left in no doubt as to the importance of maintaining awareness and following safe protocol around forklifts.

Patrick said: "You can't put price on forklift safety. If it means getting down to the warehouse to police behaviour, then you have to do it."

He said: "It is important to keep learning. We have had an exchange of knowledge between different locations around the world. For example, on a visit to our Thai facility, we noticed they had hi-vis seatbelts which allows managers to quickly check compliance. We took that from them. In turn, they took signage and walkway demarcation ideas from us."