Grocery retailer SPAR in Austria is operating a semi-automated solution from KNAPP that enables goods to be picked directly from pallets to roll containers, dispensing with the need for decanting.

Headquartered in Salzburg, SPAR is one of Austria’s leading grocery chains. Its core business is food retail but SPAR is also active in sports retail and shopping centres in Austria and seven neighbouring countries, enjoying annual sales of over 13 billion euros (2015).

Its network of more than 1500 shops in Austria is served by six regional distribution centres. At SPAR's 15,000m2 regional DC in Maria Saal – which supplies around 150 stores in the states of Carinthia and East Tyrol – the company worked in partnership with KNAPP to develop a semi-automatic fulfilment system.

With steady growth, the Maria Saal DC was facing increased dispatch volumes. As picking large quantities of goods directly from pallets to roll containers presents a huge physical challenge, the company sought a solution that would improve ergonomics for employees, maintain flexibility in the picking process and increase warehouse performance.

The Pick-it-Easy Move solution features a goods-to-person workstation that enables the efficient and shop-friendly picking of the entire range of fresh and dry goods. Picking is performed directly from the pallet to the roll container, eliminating the need to depalletise goods. The workstation – a rail-guided picking cart – moves automatically between the target locations, which are 16 roll containers, eight on each side, that are positioned on individual lifts. 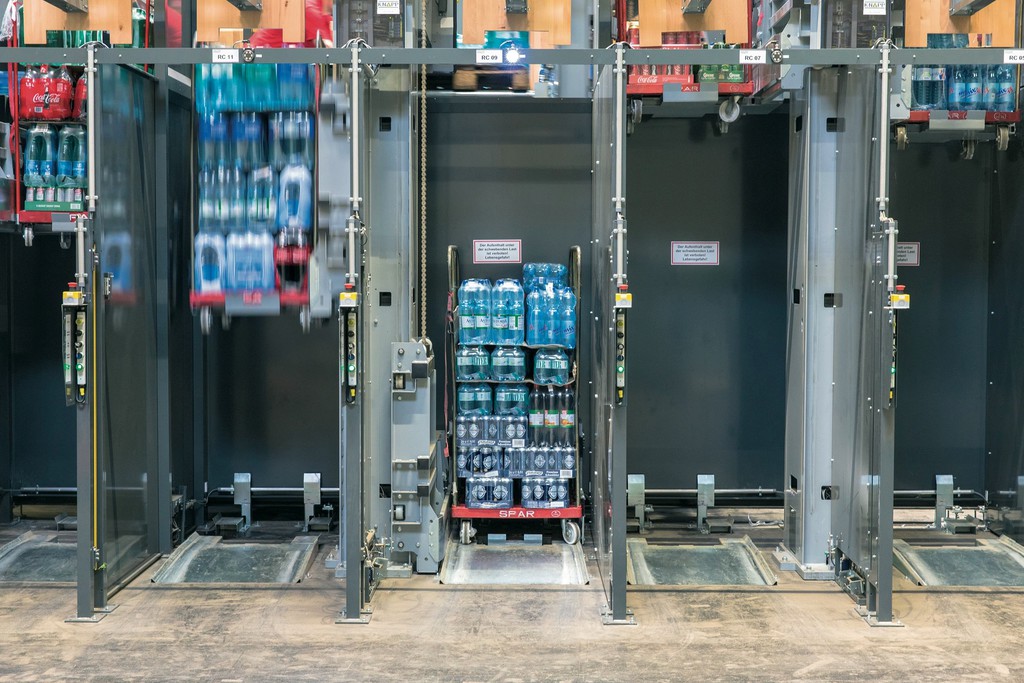 Articles are scanned at goods-in and an algorithm is used to calculate which orders should be picked manually and which by the Pick-it-Easy Move. Forklift drivers receive instructions via mobile terminals regarding which pallets to retrieve from the high-bay racking and deliver to the Pick-it-Easy Move. Two pallets of fast-moving goods are loaded on the front of the workstation. The picker then takes goods from the two source pallets and places them into the target roll containers according to instructions given on the computer screen – including exactly where each item should be placed for optimum space utilisation.

The control system automatically calculates the shortest path between the source pallet and target roll container. When picking into a roll container is complete, the operator lowers it to the floor with the press of a button. Here, a colleague secures it, replaces it with an empty one and sends this back up to the picker.

The mobile workstation is designed so that goods can be pushed – rather than lifted – from the pallet to the roll container. Along with easy adjustment of both the height of the pallet load and the target roll container, this ensures ergonomic working with minimum operator strain. Pick-it-Easy Move offers great flexibility in fulfilment as well as a doubling of performance, enabling up to 600 cartons per hour to be picked.

SPAR recently purchased more equipment from KNAPP with the delivery of the latest style of pallet-handling Open Shuttle automated guided vehicles. Featuring swarm intelligence, the free-roaming Open Shuttles are used by SPAR for the transport of pallets weighing up to 1300kg from a high-bay racking system to goods-to-person workstations. The vehicles communicate with each other and autonomously distribute orders among themselves. They react dynamically to obstacles and plan their paths and any alternative routes required. The track-free design allows fast installation and seamless integration into existing environments.