Stertil Dock & Door Products has refurbished and upgraded an installation of loading bays for a leading distributor of pharmaceuticals and healthcare products. 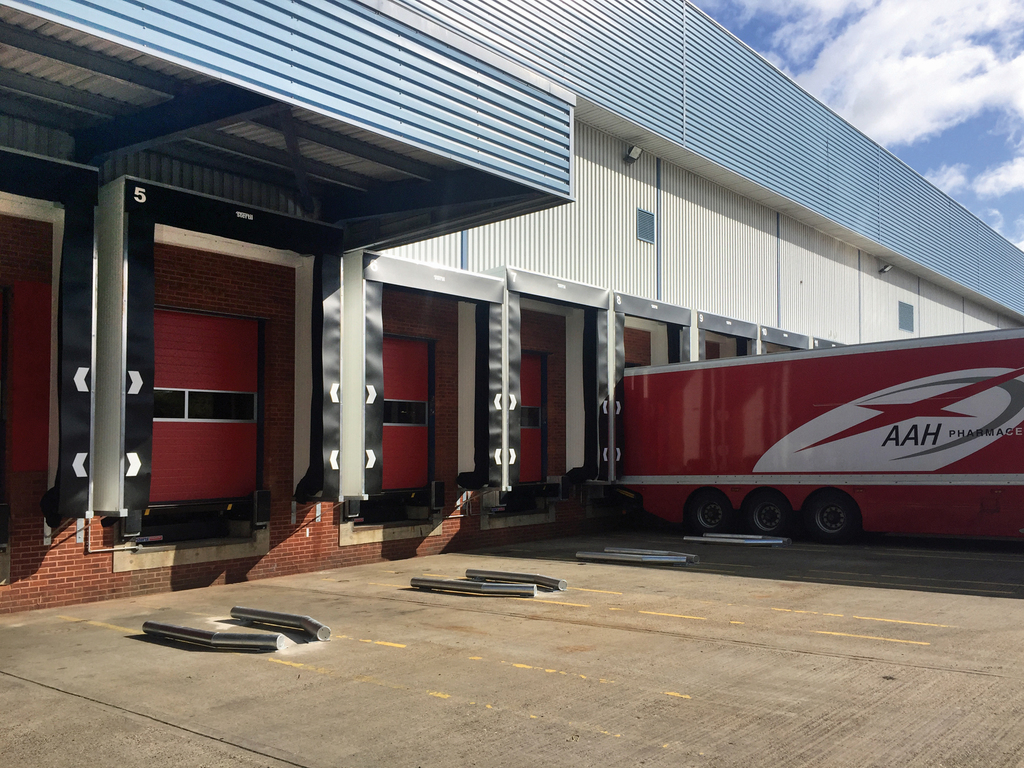 AAH Pharmaceuticals stocks a range of 20,000 products and completes more than 100,000 weekly deliveries to pharmacies, hospitals, retail outlets and doctors’ surgeries. As part of a major refurbishment project within one of its sites, AAH Pharmaceuticals commissioned Stertil Dock & Door Products to design and undertake an upgrade of its delivery vehicle loading and unloading facilities.

The upgrade to the loading bays at the company’s Tamworth distribution centre involved the transformation of 18 existing docks into 16 lorry docks and two van docks. This allows the site to efficiently handle a wide range of vehicles including articulated lorries, double deck trailers, container lorries and Sprinter vans.

An important element of the upgrade was the replacement of existing swing lip dock levellers with more versatile telescopic levellers. Importantly, the extension of the lip is infinitely variable which means that the leveller can be safely used to serve vehicles that have not reversed sufficiently far enough to make contact with the dock’s bumpers. Also, the telescopic lip allows the loading of vehicles almost right up to the edge of their decks thereby ensuring maximum space utilisation for optimum efficiency.

Stertil Dock Products has released its latest generation of PE Dock Bumpers, providing protection for vehicles, loading bays and buildings. The design allows left and right bumpers to be interchanged and rotated to enable users to achieve four times the working life of traditional dock bumpers.

Stertil PE dock bumpers combine a robust construction and patented materials to provide superior performance and longevity. Each bumper is housed within a solid galvanised steel frame mounted directly to the dock face using concealed fixings. This ensures that fixing bolts are completely covered, yet easily accessible, to prevent them being damaged by or causing damage to reversing lorries.

Also contained within the galvanised steel frame is a pair of innovative rubber cushioning strips that spread the impact forces of reversing vehicles to help eliminate damage. Mounted in front of and positioned against the cushioning strips is the pad of the PE bumper which may be supplied in black or yellow colours. The pad offers a low coefficient of friction to reduce abrasive frictional forces The bumper pad may be quickly fitted or removed utilising the steel frame’s removable bottom plate.

During use, the greatest wear is caused by reversing lorries and most often occurs on the top corner of the inside of a bumper. It’s not unusual for traditional dock bumpers needing to be replaced because of excessive damage in just this one area. However, without the need to undo fixing bolts, left and right PE bumper pads may be rapidly swapped to present an undamaged face to reversing vehicles.

“Our latest generation of PE dock bumpers is unparalleled,” says Andy Georgiou, general manager of Stertil Dock Products. “The combination of a galvanised steel frame, no exposed fixing bolts and a low-friction front pad is unique to Stertil. Also, our PE dock bumpers are widely acclaimed for lasting longer than conventional bumpers. It’s no wonder that one of our customers refers to them as a ‘fit and forget’ solution.”

Significantly, the installation of the replacement dock levellers was simplified by the innovative design of the Stertil sub frame which allowed the use of existing pit bases in conjunction with longer dock bumpers.  The height of several of the dock shelters serving the openings into the distribution centre was increased to enable the use of higher docks to accommodate double deck trailers. Also, panoramic window panels were fitted into existing sectional overhead doors to provide greater natural light and visibility of vehicles being docked.

“The upgrade of our loading bay areas has transformed the efficiency of our distribution procedures,” says Dave Baker, manager of AAH Pharmaceuticals’ Tamworth site. “We are now much better able to cope with a greater variety of vehicles and delivery vehicle turnarounds are considerably quicker. Also, the incorporation of panoramic windows into the overhead doors has made the bays themselves much brighter to create a greatly improved working environment.”