Down by the water 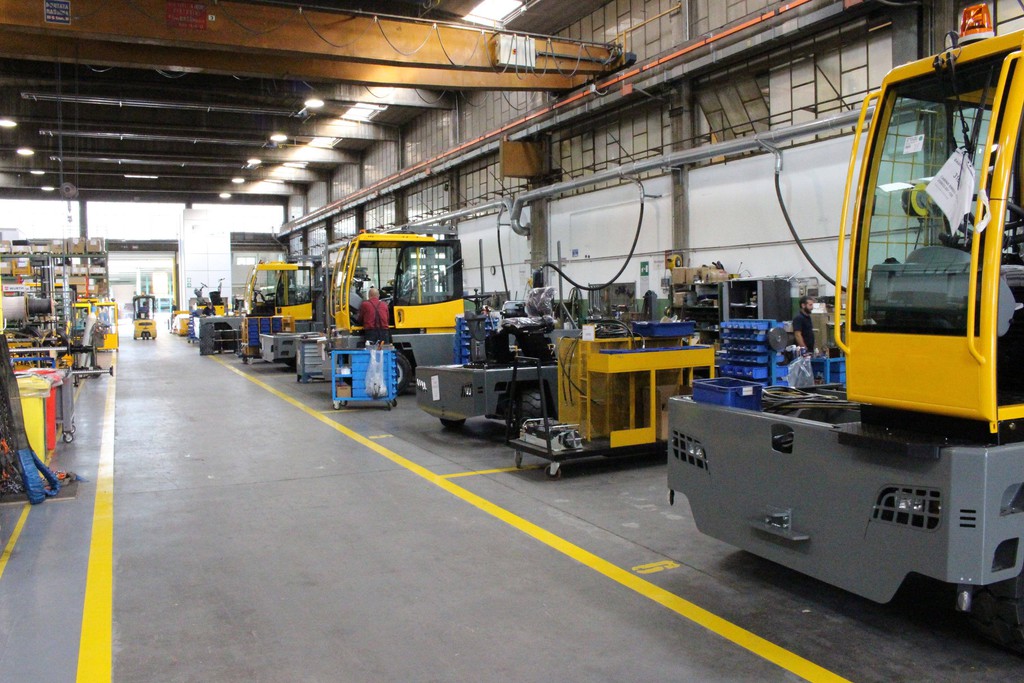 Few equipment manufacturers are located in as pleasant a surrounding as sideloader manufacturer Baumann. Cavaion Veronese has been home for over 40 years, a stone’s throw away from the tourist hotspots of Bardolino and Lake Garda.

The location was said to have been selected for its proximity to a renowned nearby technical school by owner, Wolfgang Baumann, who believes craftsmanship “permeates the local culture.”

This has certainly bred an innovative approach in the company. Last year, Baumann won the FLTA award for Innovation for its Archimedes outreach system.

This year the company is focused on its new, compact electric ELX sideloader.

The lighter, shorter model has improved turning circle without sacrificing the mast or well width, clearance and low bed height, while the combination of 120 volt power supply and 2.5 tonnes weight reduction has boosted battery performance.

The big question is - is it tough enough? Many UK end users feel diesel trucks are more robust than their electric cousins, and fear that electric models will not last a full eight hour shift without needing to be re-charged.

It is difficult to specify how long a truck will last on one charge, as much depends on travel distance, ground conditions, number of lifts, skill of the driver to name just a few variables.

But Baumann is confident, having tested the ELX with customer Metsä Wood in a tough application, that it is a genuine alternative to diesel with the robustness to cope on site and the headroom needed to complete a shift without needing to be recharged.

Unveiled at LogiMAT in 2016, the nimble ELX is now in full production.

Aside from likely persuading diesel users to make the leap to electric, he says it represents Baumann's greatest opportunity for winning back former sideloader users that have switched to multi-directional machines, such as Combilift.

“The main benefit to multi-directional machines,” suggests Klaus, “lies in the smaller spaces in which they can operate. If you match that benefit, you’ll start to see our other features such as travel speed and distance, stability and comfort becoming more important to the user.”

The ELX is the first electric sideloader under four metres in length that retains a full well width and ground clearance. The bespoke battery more than doubled the work cycle expectations during field trials, but that’s not the only electric upside. “Cost saving, of course, is a big factor, but so too is noise. In Germany, Austria, Switzerland, long-established companies which have seen towns grow up around them, are under pressure to cut noise pollution by neighbours and legislators.”

The production facility itself is arranged in halls, producing less than 400 units annually, but each to high levels of durability and engineering integrity. Fabrication, painting, CNC bays, parts storage and refurbishment are either side of the central assembly hall, whilst around the building exterior, tilting beds and manmade ramps serve as testing facilities.

A select number of suppliers help with items such as chassis and steering axle development, but a huge amount of work is carried out in-house, from mast creation to wiring looms; painting to welding. Per unit, the manufacturing process usually lasts around a fortnight, with up to another week, depending on capacity, set aside for product testing.

A robust chassis is a crucial part of the sideloader physiology. Progressing down the production line an overhead crane is used to transport the huge chassis frames between fabrication and workshop, whilst a new rotator is used to help with mast welding.

“We sent people to the chassis manufacturer for over six months before adding them to our suppliers,” says Klaus. “Simple requests, such as changes in fork length, have huge repercussions for the chassis, axle and deck. Our new outreach system also resulted in changes to the weight distribution, so the integrity is crucial.” 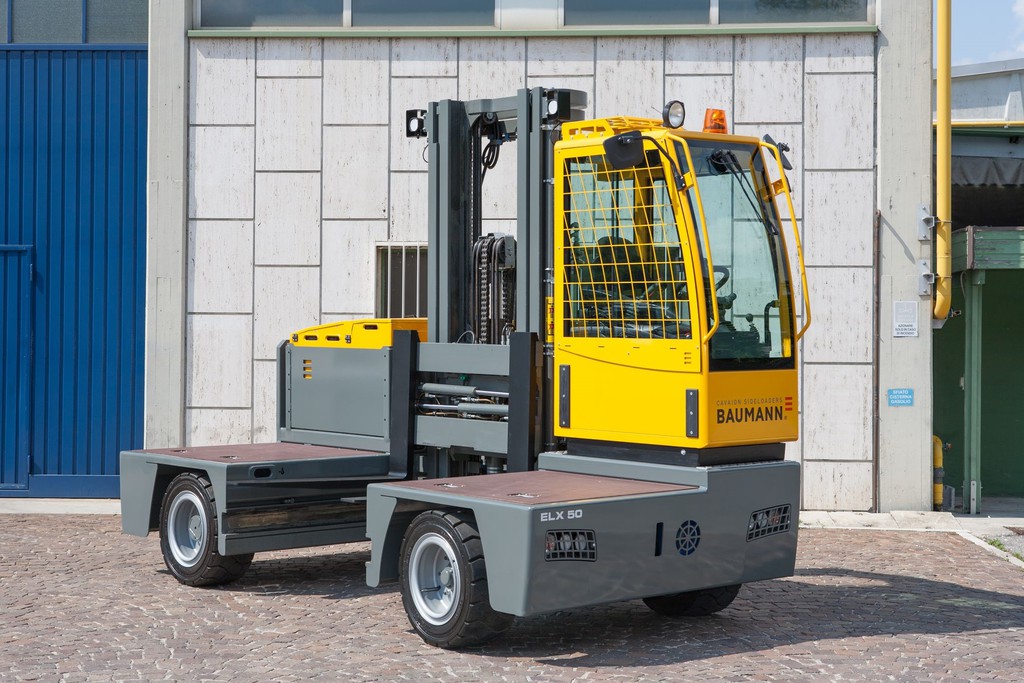 Klaus credits a new technical production troubleshooter with helping to bring new developments to the production line, whilst technical director, Riccardo Bove, has spent years working on refining and revolutionising everything from electronic systems to hydraulics and ergonomics.

Another of this year’s new developments, a panoramic cabin, is also on show. Two years in the making, and following six months of testing, the cabin has been redesigned to strengthen the framework and allow central side struts to be removed. The previous cab, says Klaus, improved visibility to the front corners but the continuous glass side panel now means the driver has a much improved view from both sides.

There was also time for us to be treated to a view of the H2GX60, a fully-working prototype and fuel cell powered sideloader, developed in conjunction with a German energy business.

The concept was the first Italian-made fuel cell machine to receive European funding and has proved its capabilities with over 600 hours of field trials. “For us we will not be happy until we've had at least 10 times that amount,” comments Klaus, “but the case for hydrogen fuel use is still to be made, particularly in Europe where the cost of hydrogen is higher.”

“The main benefit to multi-directional machines, lies in the smaller spaces in which they can operate. If you match that benefit, you’ll start to see our other features such as travel speed and distance, stability and comfort becoming more important to the user.”

The counter-argument suggests the answer is for businesses to self-generate hydrogen, produced on-site via wind or solar panels, or for hydrogen to be spun off from renewable sources where the fuel is, in effect, used as a storage medium. Whichever way the market goes, Baumann appear well placed to continue its tradition of high quality and highly engineered machines. For what sideloaders may lack in terms of numbers, in comparison to counterbalance machines perhaps, they make up in importance to customers where they tend to play a more mission-critical role. 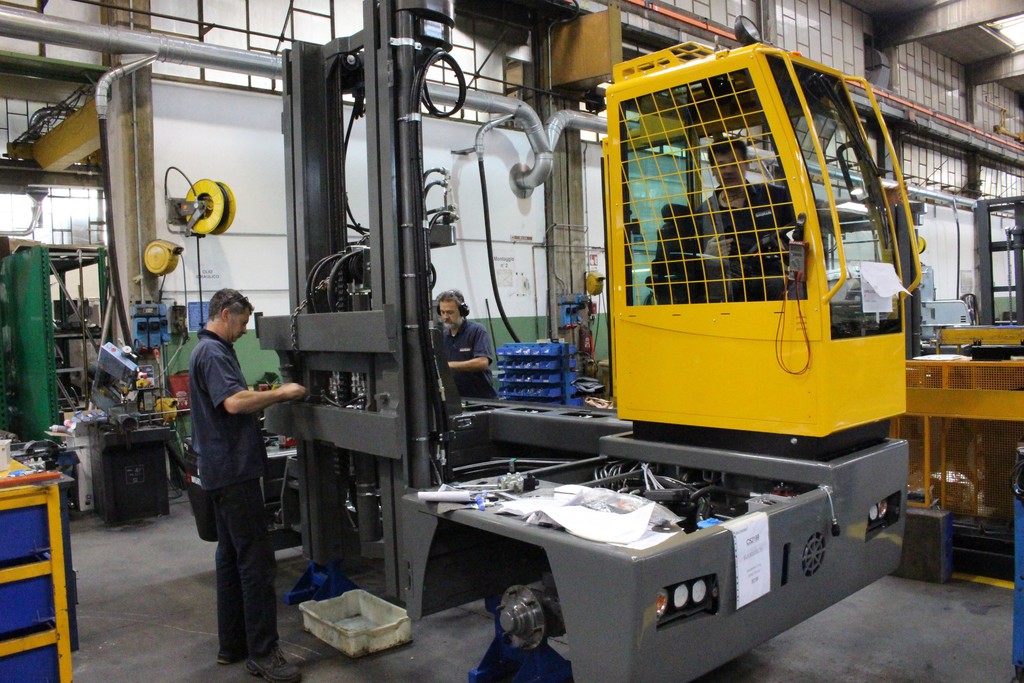