Following the award of two major contracts in the second half of 2016, Daifuku UK finished the year on a high by securing a major contract at one of Europe’s leading car manufacturing plants. 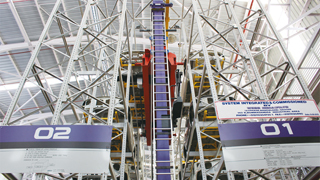 Daifuku were selected ahead of their competitors due to its expertise in automotive projects and ability to deliver the project within a very short time frame.
The project, which starts on site early this year will be managed by Daifuku’s UK based project team and will run in parallel with Daifuku’s existing contracts.

This latest contract award caps off a hugely successful year for the Japanese materials handling specialist, which celebrates 80 years in the industry in 2017 and already has orders secured well into the second half of its anniversary year.
Daifuku aims to build on this successful platform by helping its customers gain a competitive advantage in 2017 and beyond through the implementation of its innovative and wide ranging solutions.

Founded in 1937, the company currently employees more than 7,800 staff and realises an annual turnover of approx. 2.2 billion euros.