simplehuman has gone live with the Snapfulfil Cloud WMS. 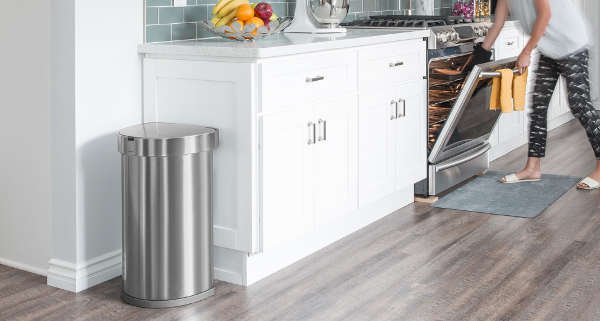 Established in the US in 2000, simplehuman started out making and selling high-end kitchen bins and has since diversified to offer a range of kitchen and bathroom products, including sensor activated bins, soap dispensers and LED mirrors. The company set up shop in the UK in 2004 from where it currently fulfils all European B2B and B2C orders.

simplehuman had previously outsourced its UK-based warehousing and fulfilment operations to a third-party provider, however, it found them unable to meet its requirements for speed and flexibility. As a result, simplehuman took the decision to invest in a new, purpose-built 103,000 sq ft warehouse in Thrapston, Northants and to manage the operation itself.

Employing around 25 people, the warehouse receives up to 15 container loads of product and ships around 500 pallets and 2,000 e-commerce orders each week, across around 1,000 SKUs.

To support the insourcing of the operation, the company required a best of breed warehouse management system which could be interfaced with its SAGE 200 ERP, implemented quickly without a large capital investment and used to drive productivity improvements. Following an evaluation of around a dozen systems, including the Manhattan Scale WMS used at the time in simplehuman’s US operations, the company determined that Snapfulfil was the best system to meet its requirements in the UK.

“We’ve found Snapfulfil to be both attentive and flexible – unlike many vendors, they understand that every business is unique and didn’t try to pigeon-hole us as just another wholesale distributor.”

simplehuman took occupancy of the new warehouse in May 2016 and went live with Snapfulfil in September. As a result, the company is already shipping 40% more e-commerce orders and also expects to reduce headcount in the operation by around 15% within six months.

James Dowdeswell, simplehuman’s (EMEA) Director of Finance and Operations, said: “We’ve found Snapfulfil to be both attentive and flexible – unlike many vendors, they understand that every business is unique and didn’t try to pigeon-hole us as just another wholesale distributor. Allied to this, Snapfulfil’s rules-based approach to configuration allowed our instance of the system to be closely tailored to our specific operational and reporting requirements.

“The user interface is also very intuitive which has led to good user acceptance – it’s easy for new systems to be rejected by users and we haven’t had that with Snapfulfil.”

Going forward, simplehuman will also use Snapfulfil as part of its plans to offer third party warehousing and fulfilment services from its UK facility, as well as supporting the opening of a second distribution centre in mainland Europe within the next two to four years.