Robotics and the click-to-ship revolution

Robots have always been considered as futuristic. The reality is, they are entering the here-and-now in a significant and transformative way - and nowhere more so than in the modern warehouse. By Simon Cooper, Business Solutions Sales Director, Dematic Northern Europe. 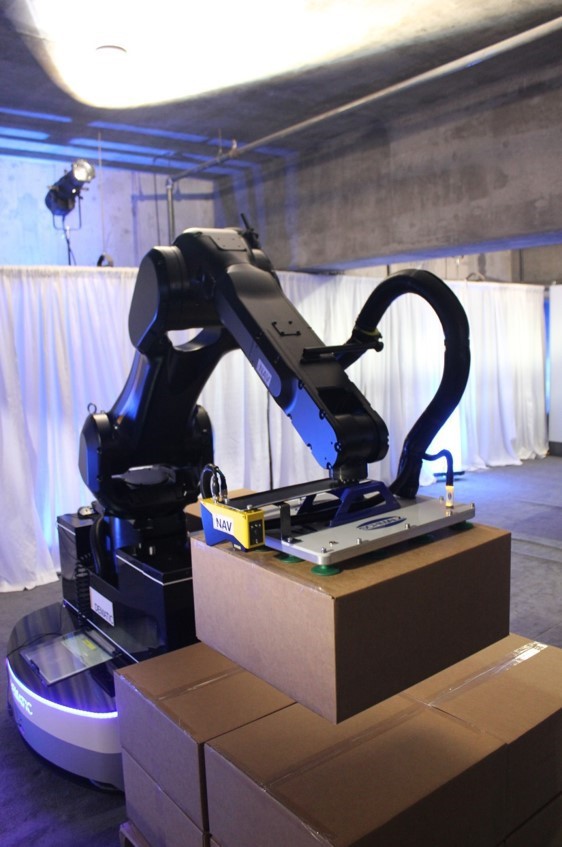 Across all walks of life, robots, in the form of autonomous cars, drones and voice-activated artificial intelligence, are gaining public attention. Trials of autonomous cars have taken place in several major cities already, including London, and drones have been famously used by Amazon to deliver online orders. But robots are set to have a far wider influence on industry, logistics and retail enterprises.

Of course, articulated robots have been a common sight in automotive assembly plants for years, and to some extent, they are often seen within warehouses assembling pallet loads. But, the use of robotics for ecommerce order fulfilment is something new and is fast becoming a major focus of attention for the large retailers.

Robotics will soon become the key differentiator for retail businesses competing on cost-to-serve and speed of delivery for online orders. Many retailers are aiming for 15 minutes from click to ship – an ambitious target that can only be achieved through the use of robots. Major retailers across the globe are actively engaged in seeking solutions to these challenges.

The interest in robotics is strong. A recent report published by Research and Markets found that worldwide sales of warehousing and logistics robots hit $1.9 billion in 2016 and predicts that the market will reach $22.4 billion by the end of 2021. In a separate study by analysts, Tractica, worldwide shipments made by warehousing and logistics robots are set to rise from 40,000 units in 2016 to 620,000 units annually by 2021.

This growing interest in warehouse robotics is being fuelled, in the main, by the consumer’s continued preference to shop online, with the rising expectation for next day delivery. According to figures released in March 2017 by the UK’s Office for National Statistics (ONS), shoppers spent an estimated £1bn a week online with UK retailers during February, 20.7% up on the same month last year - accounting for 15.3% of all retail spending.

But, how will omnichannel retailers cope with this significant and continuing shift to online sales? Where will the labour force come from to match the rising demand for single order picking? In large ecommerce fulfilment centres many hundreds of people are already employed as pickers and packers and, in key areas, finding staff is becoming increasingly difficult, but many more will be needed if the trend to online continues as predicted.

Perennial fears over the loss of some manual warehouse tasks to robots could possibly stand in the way of a sensible solution to the problems of scale of demand and cost. A draft report to the European parliament, prepared by MEP Mady Delvaux in 2016, even raised the idea of a tax on robots. However, robots can increase the productivity of the existing labour force and would be invaluable in the boost to activity leading up to Christmas, when finding extra staff can be difficult.

Importantly, robotics and automation radically improve productivity and through these gains, businesses grow and develop, requiring more people to maintain systems and run the newly developed channels of growth. Thus, the overall prospect for jobs remains positive going forward, although some roles may change.

In the UK, there are some that believe finding labour for picking processes may become more difficult following the decision to leave the EU, making investment in robotic picking an even more compelling option. It seems likely that many retailers will choose to amortise the cost of automation over a longer time period, and so ensure operational efficiency and customer service, rather than be exposed to the possibility of being dependent upon a dwindling pool of labour, with the linked prospect of rising labour costs.

There is already evidence of a growing number of retail businesses with large manual operations looking to the viability of automated DCs that incorporate robotic systems. Even organisations that presently use paper pick lists are exploring automation.

Mixed case palletising and roll-cage building is becoming increasingly important for retailers, particularly grocers, as they look to ‘store friendly sequencing’ to achieve greater efficiency with shelf replenishment at their retail outlets. Dematic have developed shuttle-based systems to deliver full cases of product in sequence to specially created robot handlers and these dedicated machines pick-and-place product in mixed case fashion to a pallet or roll-cage. In this type of operation it is critical that the storage and retrieval system supplying the robot is fast enough to handle the cases and intelligent enough to deliver the cases in the exact sequence. 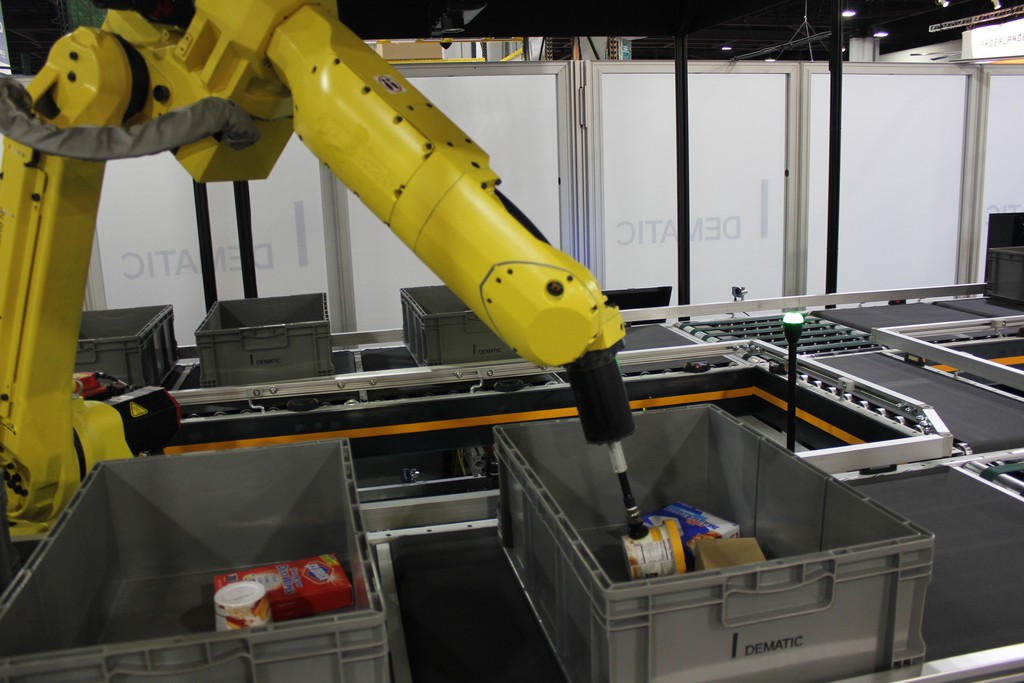 Similarly, many retailers are asking for retail totes to be built up on pallets or dollies automatically by robot in a store friendly sequence. This is relatively straight forward, removing manual labour and using intelligent software to sequence and build the load in accordance to the planned layout of the retail store – building the load in reverse drop sequence. When the dolly is wheeled down the aisle in the store, items are available in order, ready to be placed on the shelves.

However, the Holy Grail in warehouse automation, and undoubtedly the most difficult challenge to date, is the use of robots for single item picking from a stock tote to an order tote. This is cutting edge technology and Dematic is actively engaged in developing robots for picking individual items, such as a bottle of shampoo or a tee shirt, from a stock tote and placing it to an order tote. Dematic’s RapidPick XT robotic picking system is leading this field and can consistently pick up to 1,200 items per hour with an uptime approaching 24 hours a day, seven days a week. The robot is fully articulated and equipped with a 2D/3D vision system.

It is the vision system and the gripper that are the two most highly complex aspects of this challenge. Dematic are trialing both gripper and vacuum technology to effect the pick and creating machines that are able to swap these ‘hand’ pieces accordingly, depending on the characteristics of the items being picked.

Another robot that has just been developed by Dematic’s research unit in Grand Rapids is the Multishuttle ARM. This is a completely automated piece picking system that combines the Multishuttle donor tote buffer storage and conveyance system, a robotic arm, vision equipment, and warehouse control and order management systems to enable picking of individual items to batch or order totes. Multishuttle ARM replaces manual goods-to-person processes for order fulfilment operations.

There are many more exciting developments taking place regarding AGVs and robotics.

Robotic solutions have become viable only through recent advances in artificial intelligence. They are now far more cost-effective and are able to quickly identify, verify, pick-up and place single items at speed. These are complex problems that are being solved, here and now. Robots are no longer science fiction; they are fast becoming a very real part of the contemporary warehouse.

About Dematic
Dematic is a leading supplier of integrated automated technology, software and services to optimise the supply chain. Dematic employs over 6,000 skilled logistics professionals to serve its customers globally, with engineering centers and manufacturing facilities located across the globe. Dematic has implemented more than 4,500 integrated systems for a customer base that includes small, medium and large companies doing business in a variety of market sectors.

Headquartered in Grand Rapids, MI, Dematic is a member of KION Group, a global leader in industrial trucks, related services, and supply chain solutions. Across more than 100 countries worldwide, the KION Group designs, builds and supports logistics solutions that optimise material and information flow within factories, warehouses and distribution centres. The company is the largest manufacturer of industrial trucks in Europe, the second-largest producer of forklifts globally, and a leading provider of warehouse automation.