With the new and versatile OTU (Omnidirectional Transfer Unit) from Avancon, all goods are guided in different directions by moving in line of a natural curve or a crossing with the OTU. 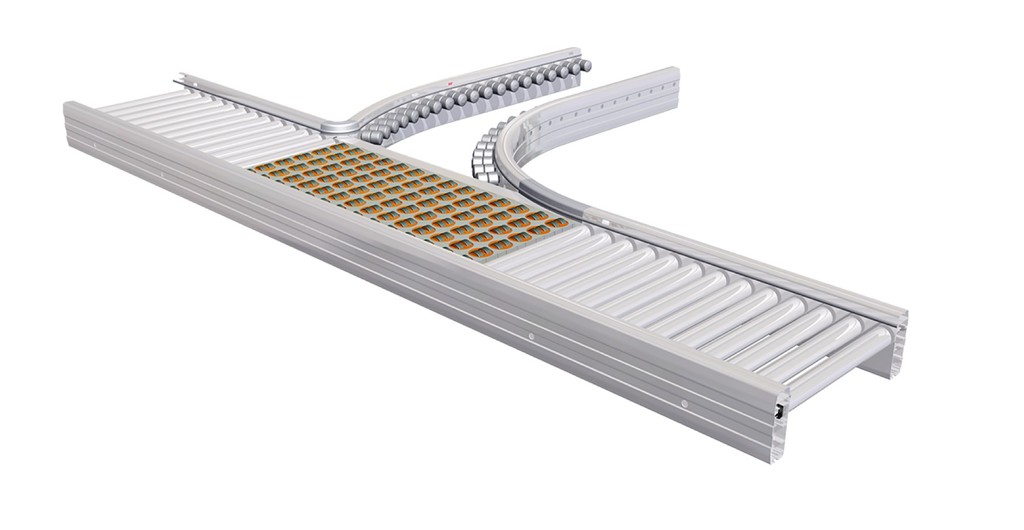 Key elements allow easy construction of any sized crossing or diverter in a conveyor systems using versatile OTU-bricks. It is also possible to build crossover transport, sideways movements or sorters.

The OTU component moves goods in almost any direction and can be used for purposes such as infeeds, switches, diverters, crossing, transfers, sorters and so on. The OTUs can be universally combined to 'OTU tables' in any length and width, adjusted respectively to the largest product to be conveyed (cardboard boxes, plastic boxes or, indeed, anything else with a flat base).

The single element, which consists of several detailed parts made of strong techno-polymers, measures 75 x 75 x 133mm in size and is assembled with the belt and combined with a toothed rack, which enables movement of the rollers in any direction (nearly 360°). For instance, in a diverter/switch the transporting rollers build a natural curve to transport the goods into the right or left direction. Transport can be carried out smoothly and at speed, but uses less space.

The wheels have PU (Polyurethane) tyres and are powered via bevel gear system within each element. This cannot be seen from outside.

The concept is to drive and move everything electrically directly with the standard DC gear-motors of 48V and 40W. The whole construction can be built to a very small height, saving time and money.

Avancon offers also a complete control system, based on the field bus AS-interface. This guarantees a smooth, fast movement. It is also able to communicate with other bus or higher IT-topology.

Producers of conveyor systems can buy the OTU element as individual parts for self-assembly or as the fully assembled OTU table including motors and control units to be mounted under or between any type of conveyor frame construction.

Together with the well known producer of transformers and power supplies, the Puls-Group, the start-up Avancon has developed a universal power supply unit for the field-bus AS-interface of about 30V and for up to 20 DC-Motors of 24V or 48V – combined and built in a crossbeam of a conveyor frame construction – which is invisible from outside. The system is called “3-in-1” Power Supply.

Avancon says it is a long-standing frustration to have boxes and cabinets fixed to the conveyor lines, or to have expensive cable channels running from central installation cabinets.

“One should make them invisible,” says Dieter Specht, the founder of the Interroll Group and the inventor of the Avancon ZPC-Conveyor system. “So I got the idea to incorporate the power supplies completely inside a crossbeam. Because each conveyor section – whether of 1 metre or 3 metre length needs two crossbeams in order to get a rigid construction. Of these we could use one, specially modified to get room inside for the two different power-supplies. The solution is not only economical but also remarkably easy and aesthetically pleasing.”