On Saturday 24th February, more than 400 of the fork lift truck industry’s leading figures gathered at the International Centre in Telford to celebrate all that’s best in the sector and bestow its most prestigious honour: an FLTA Award for Excellence 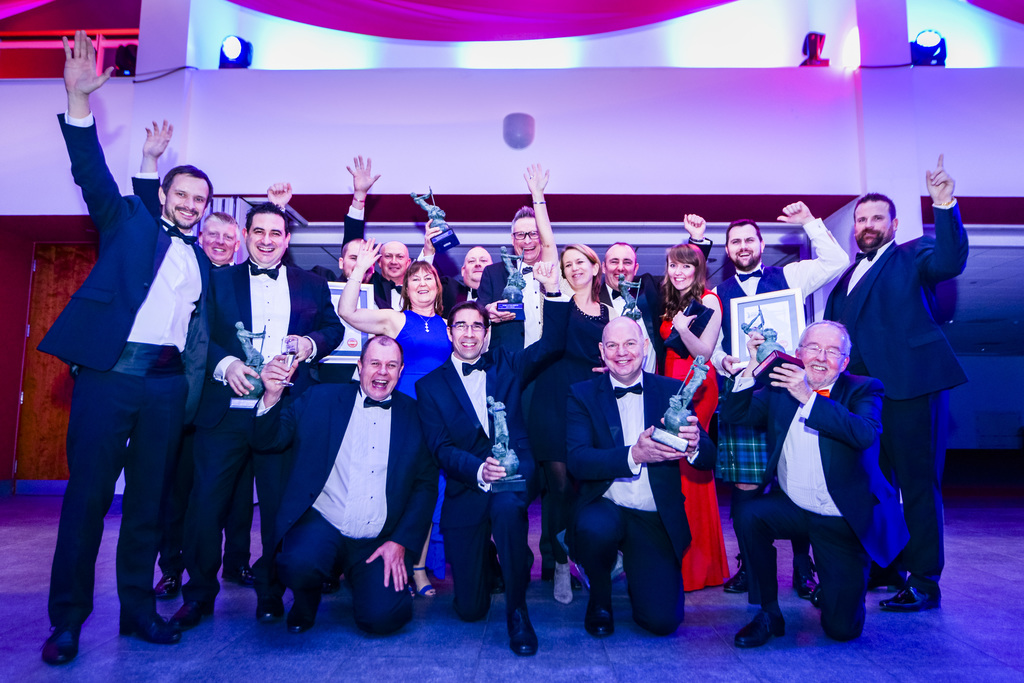 FLTA Chairman Duncan Nealon opened the glittering ceremony and gala dinner with a moving tribute to industry stalwart Alan Bird of Second City Lift Trucks, who passed away in January.

The event, which was compered by award-winning comedian and author Dominic Holland, closed on an emotional note, as the crowd took to its feet in recognition of John Knowles of JKC Creative Marketing, who received the Services to the Forklift Industry Award 2018.

Big winners in the product categories included HIAB’s E-MOFFETT in the Environment category, which is sponsored by B&B Attachments. It was praised by the jury for allowing a national chain to overcome residential noise complaint issues, while reducing fuel costs and its carbon footprint.  All this without any alteration to its distribution model.

Linde added another Archie statuette to its eight-strong collection when it was awarded the FLTA Awards for Ergonomics, which is sponsored by ECOBAT Technologies. The unique design approach of its T20 S electric rider stand-on pallet truck – which reduces body vibration by 38 per cent - really caught the jury’s attention.

The Innovation Award, which is sponsored by Investec Asset Finance, went to another first-time winner: Philadelphia Scientific. The Awards’ expert jury was impressed by this simple-but-effective, affordable and time-saving solution to the costly and widespread issue of flooded batteries.

The Archie for Supplier of the Year, which is sponsored by Yale Europe Materials Handling and decided entirely by the votes of FLTA Members, went to MIDAC.

The FLTA Board was hugely impressed by the wide field of entrants in this year’s Safe Site category, which is sponsored by Doosan Industrial Vehicle UK. The winner, Scottish Railway Preservation Society, was impressive in the way the organisation used engagement to tackle negative attitudes towards training – particularly among older volunteers. Entries from CF Fertilisers and Chivas Brothers Ltd were so impressive that the Board awarded highly commended status to each.

Some of the evening’s warmest applause was received by individual winners:

In the Apprentice of the Year category, sponsored by Industrial Tyre Network, two young engineers from Linde Material Handling were recognised for their skill and dedication. Runner up Oliver Shephard received a £200 cheque, while his colleague – and overall winner – James Middleton was awarded a certificate and cheque for £500.

The Association also revealed the 15th recipient of its Lifetime Achievement Award, which is sponsored by Toyota Materials Handling. Presented to those whose extraordinary career achievements are an inspiration to all, this year’s honour was bestowed on Paul Pleasants of PLP Lift Trucks.

The ceremony closed with the presentation of the Services to the Industry Award, which is sponsored by Mentor FLT Training, to John Knowles of JKC Creative Marketing. The announcement was greeted by a standing ovation.

The FLTA Awards has served as a ‘Pick of the Year’ for the materials handling industry’s best products and services since 1995. It was established to encourage and reward those striving to raise standards.

“With a record number of entries to contend with, each of our winners faced the stiffest of competition” said Association Chairman Duncan Nealon. “My hat goes off to each and every one of them.

“Just being named a Finalist in these categories was an outstanding achievement, worthy of international recognition. They are driving us towards a safer, smarter and more environmentally friendly future – safeguarding operations for generations to come.”

At the event’s after party, the crowd-pleasing Rick Parfitt Jr Band entertained a packed dancefloor as guests talked, laughed and danced into the small hours.

“This year’s Awards raised the bar once again” adds Mr Nealon. “It was a fantastic evening for all who attended. It was wonderful to see so many old friends and new faces come together for this very special evening and I’m already looking forward to seeing them all back here – same time, next year!”

Below follows a full list of winners, their categories and Award Sponsors: