Hyundai is the brand of choice for busy end-to-end transport firm Scotline, which has revamped its fleet with 20 heavy lifting Hyundai forklifts supplied by Acclaim Handling. 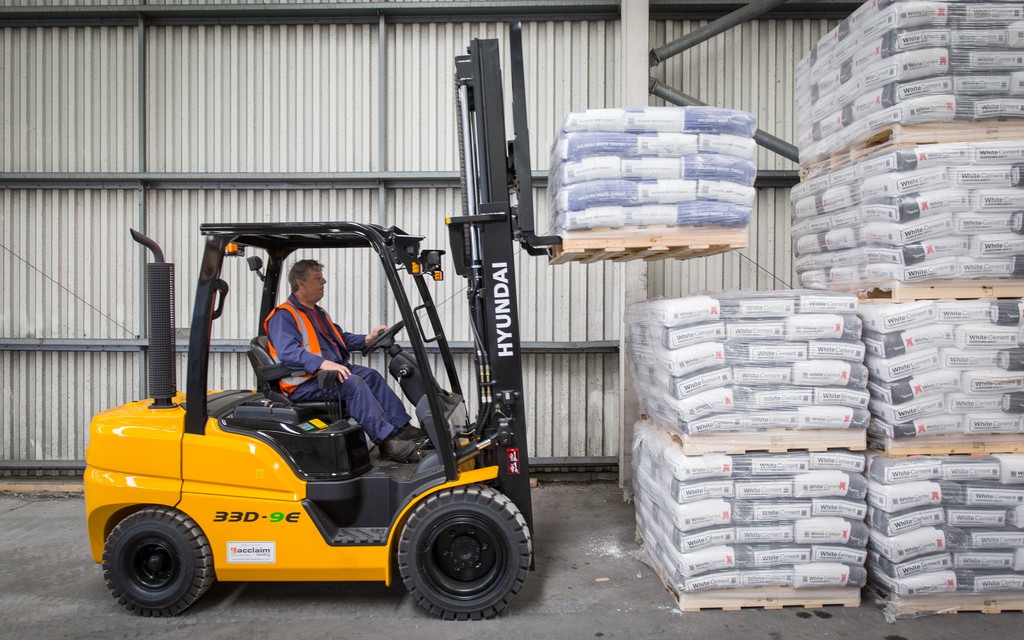 Scotline runs a large Hyundai forklift fleet with 18 machines, with another two on order for delivery later in the year.

The majority of the machines are 5-tonne 50DA-9’s – the company’s latest purchase are two 3-tonne 33D-9E machines, which were put straight to work shifting concrete based products, at the company’s Kent headquarters on the banks of the River Medway.

Rob Millatt is project manager at Scotline: “The majority of the material we handle is sawn timber – we also handle other products and are currently expanding the business into project cargos.”

The 5-tonnes machines are tasked with handling timber. The two new 3-tonnes forklifts are on specialist duties, moving palletised cement.

"The requirement was for a 3-tonne lift at 3-metres, but with a total truck mass of under 5-tonnes. Acclaim Handling managed to find us something when we were struggling elsewhere."

Rb explains: “The requirement was for a 3-tonne lift at 3-metres, but with a total truck mass of under 5-tonnes. Acclaim Handling managed to find us something when we were struggling elsewhere.

“Because of how we ship the palletised cement - we can only stack it so high and the product is quite difficult to handle which is why we invested in these new trucks – as they are able to handle them correctly. We also have a weight limit on trucks as we crane lift these forklifts into the ships – these 3-tonne machines are the perfect for the job.”

Scotline has been working with Acclaim since 2014. 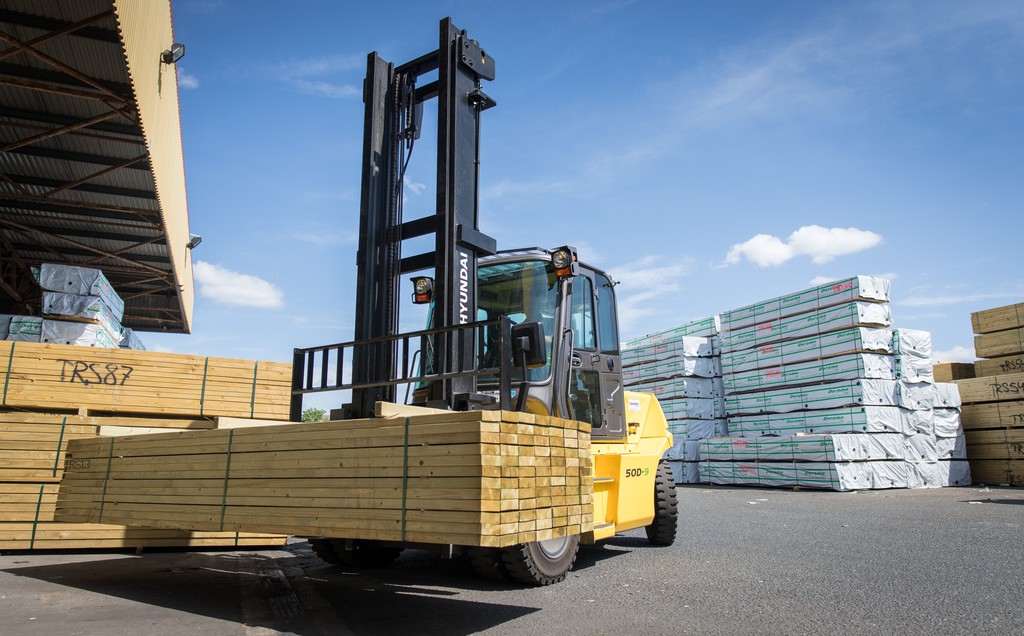 Rob reported: “In early 2014 we looked into replacing our fleet of aging Hyster forklift trucks as the repair bills were increasing and they were becoming less and less cost efficient.

“Speaking with Acclaim we found that Hyundai trucks would be suitable replacements and were well suited for carrying packaged timber. We were initially looking to buy a couple of trucks – but we upsold ourselves and decided to take ten of the 5-tonne Hyundai forklifts to completely refresh the fleet. We didn’t expand on our new fleet until last summer when we decided to order six of the bigger 5-tonne trucks.”

Rob went on explain the difference with the new 5-tonne machines and the original machines.

“The new machines are on a 7-tonne chassis but with only a 5-tonne rating therefore a lighter counter balance. We do not need the actual weight, but we do need the larger chassis for the stability when working on uneven surfaces. There’s very little competition in the market for this sort of truck and there are not many manufacturers that make 7-tonne trucks especially a machine with a 5-tonne variant - just with less counterbalance. From what I can see there’s almost no competition at all. So, Hyundai most definitely have the advantage there. The fuel consumption is also very good as you’re not dragging around 2-tonnes of metal that you don’t need.”

Rob liked that Acclaim had a local office and that they could deal with individuals who knew about both the sales and after-sales.

“Nowadays getting the technical backup and dealing with the same person each time you call is getting rarer. With Acclaim we have continuity and we have built up a relationship with them over the years – which we really like,” he says.

Scotline estimates it has invested in the region of £800k in the Hyundai brand which it sees as a long-term investment.

“The key requirements for Scotline were reliability, ease to service and of course cost. We’re also very happy with their overall performance,” reported Rob. “Downtime is low and any issues we’ve had have usually been related to sensors around the emissions control. The best features of the machines are probably the comfortable cabs with options for a/c and radio. The basic functionality nowadays is a given, what makes the difference is the things that make people’s lives easier when they’re working on the truck every day.”

When Scotline first adopted the Hyundai brand there was some scepticism among the operators initially, being a new truck from a manufacturer; and with some new features like automatic handbrakes.

Rob said: “They quickly got over these and are now very pleased with the trucks.”

Rob concluded: “We’ve rarely had issues with the service level. Again, being able to deal with people who know us, and our trucks makes a huge difference, rather than phoning a call centre and getting a visit scheduled for a week later when the truck is down. Acclaim’s response is excellent.”

Acclaim Handling’s national sales manager Ian Taplin added: “We pride ourselves at Acclaim that we offer continuity of account management, service engineers and all-round support to our customers. These factors, along with the proven reliability and minimum downtime of the Hyundai Forklift, mean we can supply blue-chip companies such as Scotline, with confidence. We are proud of our ongoing relationship with the company.”

Shipping company Scotline, located in the south east of England, came from humble beginnings, where the business started by carrying one-off forest product parcels with its first cargo being logs, from Inverness to Varberg back in 1979.

Today, the business is thriving and is responsible for carrying nearly 10% of all softwood into the UK, through its liner services from Sweden and Latvia. The majority of which comes across the company’s two terminals in Rochester, Kent and the Port of Inverness, Scotland, which Scotline operate.